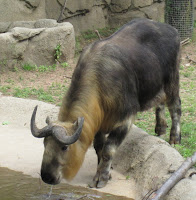 Betsy speaks: Wow! What a full day we had today. Finally we had a beautiful sunny day in Chicago, although it is still chilly outside. We caught the first bus out to the Lincoln Park Zoo this morning, and spent several hours there. It is a free zoo, and since it is Saturday, it was a crowded zoo. Although we prefer the natural habitat zoos such as the one in North Carolina, this was a nice zoo. We did see one animal that neither of us had ever seen before, a Sichuan Takin, pictured here. 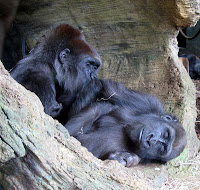 We grabbed a quick pretzel for lunch before leaving the zoo, and on the way back to Millennium Park on the trolley (part of the 3 day bus pass we had purchased) we went by Wrigley Field. Then we enjoyed a long run along Lakeshore Drive, passing Oprah Winfrey’s residence, the famed Drake Hotel, and several nice “beaches” along the way.

At Millennium Park we picked up our bikes and immediately rode to the Shedd Aquarium, not far from our marina. We spent several hours there among hoards of people. As Rick said yesterday, there seems to be no recession in Chicago. Cost of the aquarium is $28 per person, and it was jammed. Although this is reputed to be the second largest aquarium (behind Atlanta) in the country, we both felt like the National Aquarium in Baltimore seemed larger.

One interesting exhibit in the aquarium was of the Asian Carp. Sorry I didn't take a picture of that most ugly fish! You may have seen videos of these fish jumping out of the water and into boats, often injuring the people in the boat. They are an invasive species that spread through the river system all the way to Florida. Extensive measures are being taken to prevent them from entering Lake Michigan via the Chicago River. We heard just yesterday that this may cause us to be stranded here in Chicago for longer than we anticipated. The Chicago Sanitary Canal, which we plan to traverse on Tuesday, is currently closed to boaters in an attempt to halt the migration of the Asian Carp. They have installed electrified grids to stop the fish, and they have amped up the electrification of the grid for the time being, thus preventing boats from going

through. When we first heard of this, from the America’s Great Loop Cruising Association’s network of information, the closure was for an indefinite period of time. We did hear today that the canal is supposed to reopen on Tuesday, so we are hoping that will happen.

Tonight we rode our bikes over to Millennium Park again for

dinner and to see some of the park we hadn’t had a chance to enjoy. I must admit neither of us understand some of the modern sculpture, but we did have fun with “the bean” which reflects its surroundings in an interesting way. There are free concerts here several times a week, but we did not have a chance to enjoy that in our short stay here in Chicago.

Our bikes have been crucial here. We’re glad we had them “tuned up” a few days ago…both were having issues with the brakes. We are quite some distance away from the Navy Pier and from Millennium Park, and having the bikes has really helped us get around. There are wonderful bike paths here, and where there is not an official bike path there are wide sidewalks. So the bikes have made it much easier to get around.

Tonight we'll see more fireworks over Lake Michigan if we can stay up late enough. They're not until 10:15, and we're both exhausted from such a big day. We plan to leave Chicago tomorrow morning and head for East Chicago, Indiana, Southeast of the city of Chicago, for the 600 hour service on the motors. There we will stay at a marina next to a casino for at least two nights, so you know what I’ll be doing!