[Rick] It is Sunday and we begin the day by going to an Ecumenical Service with Anglicans, 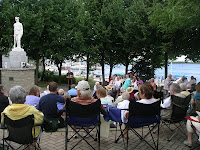 Methodist, Catholics, and some we are not sure of. The service was held at Cenotaph (you should look that word up in your Funk and Wagnall’s) Park. We sang 4 hymns and The Rev. Faye Stevens of the Little Current United Church of Canada presented the message by relating 3 stories that relate to the unwavering and forgiving love that God has for each of us. Her message came from the prodigal son scripture. 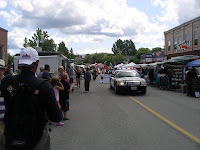 The main street was sealed off and vendors from the area set up and proceeded to sell hot dogs, chicken, pop corn, clothes, sunglasses, shoes, etc in the main street. Noon signaled the beginning of the parade, with horses, Shriners, bands, a bagpipe and drum corps, and some old cars. It lasted about 20 minutes. Then it was back to eating and buying from the vendors. The theme of the Hawberry Festival was “Messin’ with Recession”. They stressed the need to shop at home. 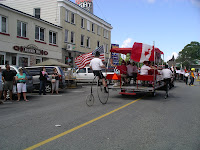 I told you that we were docked right beside the ice cream store. All day, from 1100 in the morning until 2300, there was a line of at least 15 people waiting for service. They had a good day. At dusk, as people were waiting for the evening festivities, the line was at least 25 long even though the temperature was somewhere around 50 degrees and it seemed colder because it was very windy. These Canadians have tougher skin than we do! 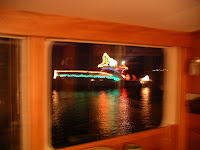 At dusk, there proceeded a parade of lighted up boats down the channel. Since they cannot do this at Christmas (remember, the bay freezes here), they do this as part of the Haweaters Festival. There was one little dinghy, all lit up and having a great time.
Immediately after the parade, the fireworks began on the mainland across the channel from Little Current, which is on Manitoulin 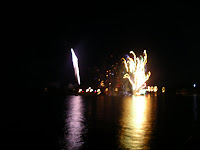 Island. They lasted about 30 minutes, and the finale was a good as we have ever seen. They estimate that over 5000 people were on the bank and in the marina area. An interesting note, first thing next morning, I walked the marina area, and it was absolutely clean. There was an occasional napkin or bottle, but for the most part, you would never have guessed that there had been 5000 people there, with a band playing and people partying until about midnight.
One last thing. You will recall that when we were in New York, the marina had only one bathroom/shower. And we never, not once, waited to use the facilities. This place has 12 combination bathroom/showers, and every time we went, we had to wait. Go figure…..
Here are two guys rigging lights on their boat for the parade at dusk. 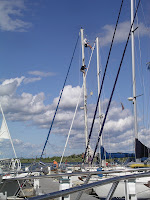 Here are some Shriners in the parade. 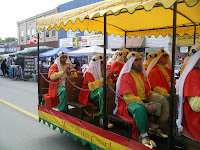