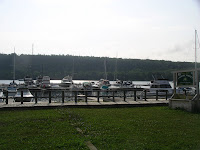 Betsy Speaks: When we arrived in Gore Bay late yesterday afternoon we talked with several other loopers about the prospects for getting out of here today. They had all checked the weather reports and said they were pretty sure today was going to be a no go. Tomorrow should be much better, and they had already been pounded by 5 to 6 foot seas a couple of days ago and didn’t intend to do that again. We looked at the forecast for both skies and wind last night and agreed. So this morning we slept in. Imagine my surprise when I looked out at about 0800 and they were all gone! The only remaining looper was “Theresa” who had anchored out in the harbor rather than staying at the marina.

The sky was sunny, and the winds appeared fairly calm, so we got ready quick. In other words, we skipped breakfast (we have some power bars on hand for days we do this), skipped the morning shower and were ready to head out. Rick even went to the marina office and checked with the local weather/wind conditions guru. He said today would be the best day out of the next 4 days, so off we went.

The trawler “Theresa” had pulled out about 20 minutes ahead of us. As we left the harbor Theresa called us on the radio to check our status, and we said we were just a few minutes behind her but should be passing her post haste. Teresa is a 46 foot Alaskan trawler with wooden hull. She weighs 50,000 pounds. We weigh less than 10,000 pounds. She called us again a few minutes later to see how we were doing in the rough water. By then we were getting bounced around pretty good, but said we were hanging in there. She had tried to call the other 3 boats that left before either of us got up to find out their status and had been unable to reach them. In fact, I had tried to call them the minute I realized they were gone and had not been successful.

Anyway, we went just a few more miles and were bouncing so bad the bikes were coming loose on the bow. Rick offered to go outside to tighten them, but I said no, he was worth more to me than the $100 we had paid for them (we agreed later there might have been days I would have gladly let him go out there in spite of the weather!). So I had pretty much kissed the bikes good bye. Then the GPS went out. In Canada we have been relying solely on my little midget computer with a USB GPS antenna. We had acquired the Canadian Hydrographic Service electronic charts (similar to our NOAA charts), which work well with Maptech’s Offshore Navigator Lite program I have…a very inexpensive solution for charts we’ll never use again. And as always, we had the paper charts clearly marked with a highlighter and nearby. But we decided that was pretty much the last straw. The closest port we could have pulled in to had we continued was at least 3 hours distant, and we would have been beaten to death by then, so we decided to turn back.

In reality, we had only gone about 6.8 miles before turning back. Once we made the turn to head back we easily rolled with the waves and made it back to Gore Bay Marina with no problem. There’s a huge difference in hitting 4 to 5 footers head on as opposed to riding with them at your rear. I know that usually people tend to overestimate wave height, so I called “Theresa” on the radio to get her estimation. They are from California and are used to cruising the Pacific where they routinely have waves this size, and his estimation of today’s waves was 4 to 5 feet with an occasional 6 footer. This conversation took place after we were safely back in the bay, and he said it was getting worse out there rather than better so we knew we had made the right decision. Later in the day we found the website that gives the official wave heights from the North Channel bouy, and they were in fact 4 to 6 feet.

Also, Rick had paid for 2 nights of internet access here, so this way we’re getting our money’s worth out of that. And we managed to not lose the bikes since it was smooth sailing once we turned around. AND since we had gotten here too late yesterday to see any of the town or to visit the museum that was a good reason to stay. So we’re trying to look on the bright side! We visited the local museum today, that is housed in the old jail. So each exhibit room is in what was a jail cell. Lots of old stuff, very interesting. The highlight was the “prisoner’s table” which was completely covered with names carved into the wood, along with length of stay…usually only a few days. 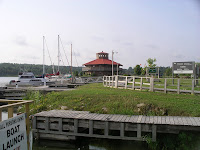 Below are two pictures taken from the top of an observation tower here at the marina. One is not zoomed, and the other one, from the same location, is zoomed to try to show the breakers in the distance. Hopefully you can see how deceiving it is to be in a well protected bay as opposed to being out in the open of the North Channel. Actually the breakers in the zoomed picture are still within the protection of the outer bay, and got worse as we left that protection and were actually in the North Channel with nothing to break the wind for many miles. The calmness inside here can really fool you! 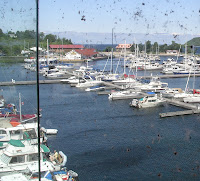 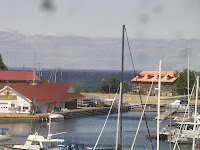 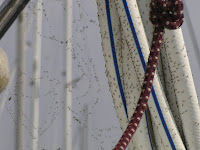 One thing we’ll remember about Gore Bay is the bugs! If you click on the photos above to enlarge them you can see the bugs on the window I'm shooting through. Last night and this morning our boat was covered in tiny black flies. Here maybe you can see them on the hose and caught in a spider web (which are also plentiful in these parts). It seems they only live a few minutes, then die. There were zillions of them on every surface. They are sort of like gnats or no-see-ums only slightly larger. They don’t bite or sting but they are just a nuisance. Maybe they chase off mosquitoes, because the mosquitoes don’t seem as bad here as other places we’ve been.