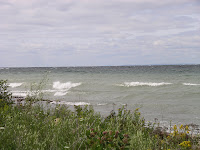 We’re still holed up in Gore Bay due to high winds on the North Channel. One 28 foot sailboat made an attempt to leave this morning but came back quickly. We did hear that our friends (3 boats) that left very early yesterday made it to the next port safely, although beaten up and scared to death. The fourth boat, Theresa, that left just before us is a huge trawler with a very high bow…much higher than the typical trawler. She made it to the next port as well, but had water over the bow and all the way over the top several times. So we know more than ever that we were right to return to Gore Bay rather than fight the waves. 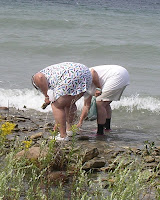 We probably wouldn’t have done a blog today, but I had a picture I just had to share. I rode my bike out to Janet Point lighthouse late this afternoon. After visiting the lighthouse I walked to the water’s edge. There were two women there picking up rocks, just like we pick up seashells on our shore. The moral of the picture is: always look over your shoulder to see if anyone is there before you bend down! I took several humorous pictures and these ladies never knew I was there! 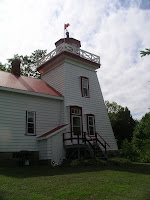 The Janet Point Light is typical of lighthouses all along Georgian Bay and the North Channel. This one has a family living in it. They lease it from the town. I’m not sure if any money is involved, but the family takes care of the yard and basic upkeep, and they have it open for tours from 1 to 4 PM Tuesday through Saturday. The lease has been handed down from generation to generation in this same family for about 4 generations. They only live there during the summer. During the winter it is vacant, not suitable for year round living. Although the woman describes herself as the keeper of the light, the actual light is cared for by the Coast Guard. 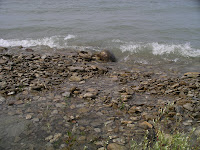 The coastline of the North Channel is covered by rocks of all sizes and shapes. So different than the sandy beach we are used to. Although normally smooth and calm according to people we’ve talked to, this week it has looked just like the ocean with waves washing ashore. 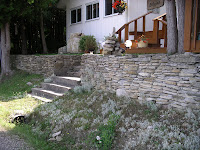 On my ride back from the lighthouse I noticed several rock walls made out of the native rock. They were very beautiful, and I can't imagine how hard people worked to pick the exact rocks and place them so well.


Everyone is marveling over how bad the weather has been this summer. Many Canadians say this is the worst summer they’ve ever experienced…just our luck! Today was beautiful and sunny but the wind has not let up. Tomorrow is supposed to be much better and we intend to leave at the crack of dawn. Wish us luck!