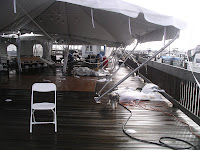 [Rick] Today is the day we finally get to go to Mackinac Island. But first, several things happened.

Yesterday, there was a big wedding at the marina. The marina has semi-permanently installed white tents for special occasions, and in fact, has bands on Wednesdays and Thursdays during the summer. There are about 5 of these white tents, with aluminum poles, anchored down by spikes and tethers. This morning, about 0700, during a huge rain, the wind got so bad, that the poles holding the tents gave way, bent, broke, etc and the tents went flying. One ended up on a neighboring sailboat, hitting it so hard the boat nearly capsized and the occupants were thrown out of bed. Of course, the chairs were everywhere. It was quite a site the first thing in the morning. 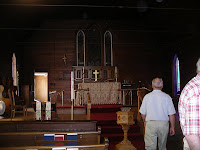 We decided to go the Episcopal Church. It was a little walk. The church is quite small, and in fact, including the minister, there were 15 people in the building. There is a lot of reading and reciting in this denomination, but it was a refreshing change. Of the 15, 4 were visitors, and 4 were going back south next week. All were very friendly and cordial. It was communion Sunday, and in this church you go forward and kneel, and they shared a common cup, not what we are used to but we just did what the others did. 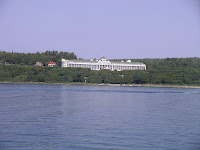 At 1330, we finally boarded our “Big Cat” to Mackinaw Island. The ride was about 20 minutes and very smooth. We passed several landmarks on the way, including the Grand Hotel on the bluff overlooking Mackinac Channel. There was a huge yacht in the harbor and a crew person was suspended over the side in what looks to be tough job. 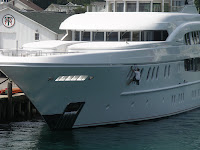 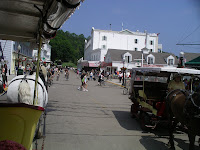 We opted for the 2 hour carriage ride and tour to see what we could in the afternoon we had allotted. Since there are no cars allowed, except police, fire, and the ambulance, the place is alive with bicycles of all description. Golf carts are allowed on the golf course only. Skateboards and skates are not allowed so as to not spook the horses drawing the carriages. The company we rode with has 400 horses and there are several companies. The taxis are horse drawn carriages. 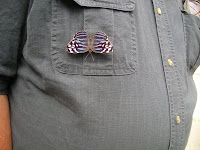 One of the stops on the tour was the Butterfly House. In this building, the butterflies are flying free, landing on you, etc. Butterflies are insects and as such, have very short life spans, usually 10-13 days. They are born, they mate, they lay eggs, and they die. The colors were spectacular. 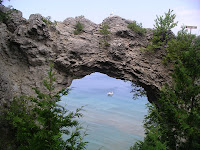 Another stop on the tour is Arch Rock. This arch was carved by running current against the rock during the time the rock was underwater during the last ice age. It is very interesting and based on its erosion rate, will not be here in 5-10 years, most likely.

We returned to St Ignace on the Big Cat. Betsy promptly went to the casino, and I went to work on catching up the blogs. So there, you are caught up. We are on the move tomorrow. The weather is supposed to be good (except for possible thunderstorms), the winds down, the waves down. The ride should be enjoyable.

(PS: Betsy just returned early from the casino…playing 3 card poker she hit a royal straight flush on her second hand! Yippee! (Payout is 40 to 1, plus a 5 to 1 bonus since the dealer qualified).