[Rick] Our second day in Chicago started as so many before, raining like crazy. We waited until lunch to even venture out to catch a hop-on-and-off tour bus. We decided on the three day package that allows us to ride, hop on and off, and take the three neighborhood tours further out in Chicago. Unfortunately, we were on a double decker bus and it began to rain very hard. We did complete the whole loop trip, 2.5 hours worth and plan to go back tomorrow and get off at some places, like the Shedd Aquarium and the Fields Museum. We will probably take a neighborhood trip to the Chicago Zoo and Wrigley Field, home of da Cubs.
For supper, we rode our bikes to the Navy Pier. This restored pier is a hub of activity with all types of food and entertainment. Harbor cruise boats leave from this pier and take cruises of the lake. At Harry Carey’s Tavern, we ate a very good pizza. The prices were very reasonable. After the pizza, we strolled to the end of the pier. Reading the historical information signs, we learn that the pier was built in the early 1900s for 4.5 million. In 1995-1998, the renovation and upgrade costs over 200 million. During the war, this pier served as a training station for fighter pilots. President Bush 41 trained here. Over 200 airplanes are in the water just off the end of the pier.

The Navy Pier has a huge Ferris wheel. The current one is one-fourth the size of the original built by Mr. Ferris for the 1892 Colombian World Exposition. Each car on the original held 60 people and took one and one-half hours to complete one revolution.

On our way back down the pier, we saw a sign about a stained glass exhibit. We entered, and to our surprise, found a permanent exhibit dedicated to stained glass still open at 10PM! Chicago is famous for its stained glass, in tradition of Frank Lloyd Wright. This exhibit had a special section for Louis Comfort Tiffany, who was prolific in glass production from 1870-1920. The exhibit was made possible by the Smith family, collectors of stained glass. The exhibit is world class, is free, and open to the public to just walk in and enjoy.

We biked back to the boat about 2230, just in time to miss another downpour. 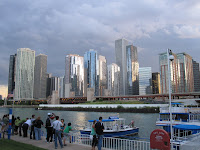 Chicago at dusk and at night: