[Rick] We left Jekyll Island for Savannah. It was a very nice ride as the weather was perfect for a 110 mile trip. Most of this section is deserted. Some people say that this is the least enjoyable part of the loop. The landscape is mostly marsh grass and reeds. There are thousands of creeks, lakes, bays, bayous. There is little wildlife, mostly cormorants. 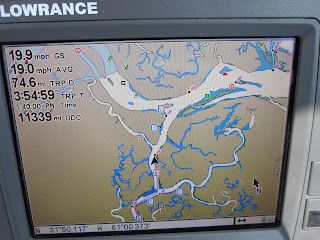 For those loopers that are behind us and have not travelled this section, here is a warning. Make sure to watch your charts and watch the buoys. There are many turns and small channels to navigate and it is easy to miss the correct channel. Many places have markers in all directions. At marker 198, you actually make a 140 degree turn to port. We were travelling at 90 degrees and when the turn was finished we were travelling 320 degrees. At marker 92, where you make a sharp 90 degree turn to port, the red marker 92 is missing. I guess those that have the waterway line on their chart will have it easier, but we do not have the line and found we had to be on our toes. 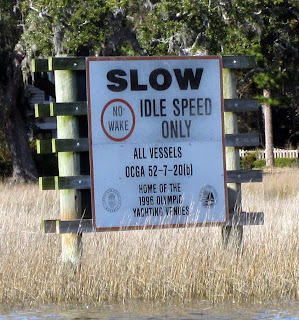 As you approach the Isle of Palms Marina, you will enter one of 4 very long No Wake zones. These will pass beside marinas and towns. Be careful, as we saw law enforcement out patrolling. The NO WAKE signs also mention that the aquatic sports of the 1996 Atlanta Olympics took place in this area. 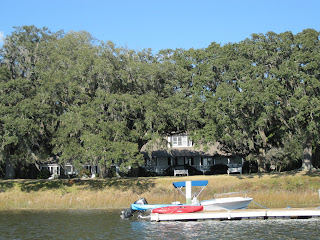 Also, here the scenery picks up with beautiful homes. These homes are large, but surrounded by live oaks, and much prettier than the large homes in Florida we saw near Boca Raton. I much prefer Old Money. 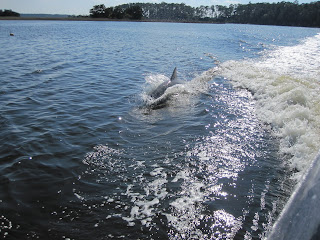 As usual, we saw dolphins all day. 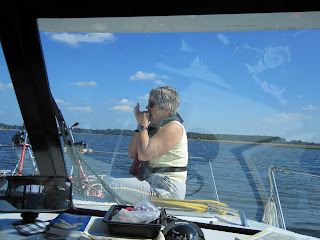 As we passed the junction of the Moon River, Betsy was on the bow, took out her harmonica and played “Moon River”.
Checking ahead we had found that the marinas in Savannah were very expensive. One was $4.00 per foot plus electricity. The other was $3.00 but we have the Marinalife discount bring the cost down to $2.60 per foot. Both seemed high and we found the Thunderbolt Marina, 8 miles from downtown, to be just $1.75. The guide book indicated a bus would take you to downtown. So, we decided to stay at Thunderbolt. Just before turning in, we called them to verify that the bus was still running and a viable ride. They told us that the bus no longer ran and the only way to town was a taxi, $17 one way, plus a tip for a total of about $20. We figured for our boat, $40 per day for taxi was about $1.50 per foot so we would be better off going downtown to the more expensive place, where we would be within easy walking distance of everything. We decided on the Hyatt Hotel, a fine hotel in the center of the old historic district. The other choice was the Westin across the river which would require at water taxi ride every time we wanted to go to town. So, we went the 8 miles past Thunderbolt and 3 miles off the waterway to the Savannah River and docked at the Hyatt. We are the only boat here. Docking here entitles us to use all of the hotel’s facilities…bar, health club, etc and it is really convenient to the old Savannah downtown. One pleasant surprise was that the dock master let us have a rate of $2.00 per foot including electricity. They said they had cable TV, but we could not find a hookup that worked. Maybe that is why the discount. The restrooms and showers are located in the Health Club. The bad news is that there is no FREE internet (they want you to pay 9.95 per day) and since this is a face dock and no breakwater, there is considerable rolling as tugs and large ships pass. However, after dark, it settled down and is not really a problem.
Tomorrow, we tour Savannah.