Once again we saw a boat's name that we thought was unique and worth a picture. 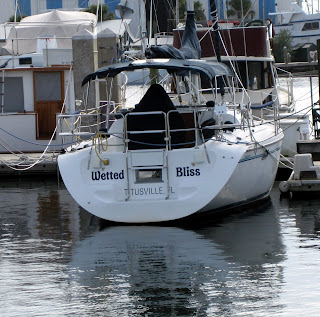 We spent a second day at the Kennedy Space Center. Our first stop was at the Astronaut's Memorial, which has special significance to us because Rick was a high school classmate of Michael Smith, the Pilot of the ill-fated Challenger. After pausing for a moment of silent prayer, we reverently admired the memorial. It is a very large slate with the names of astronauts that have been killed in various space disasters chiseled out, lighted from behind. 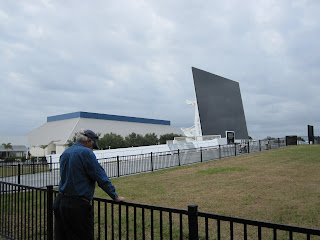 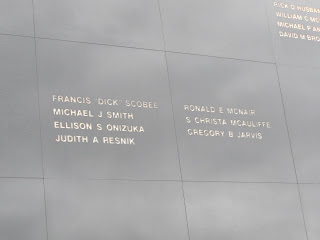 Opposite the wall are several pictures and plaques telling of the lost missions and astronauts: 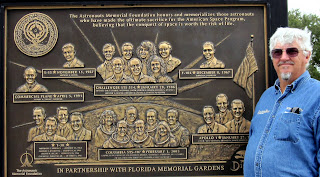 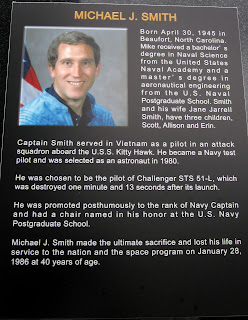 We then went into an area where we watched a live discussion about the upcoming launch that we are here to see. As of right now all systems are go, and there is an 80% chance that the launch will not be held up because of high winds that are expected early Sunday morning. That is up from 70% yesterday, so things are looking good! We learned that there is only a five minute window for the launch, so if it doesn't happen by 4:45AM we can give up and go to bed. Also, if for some reason it does not happen on Sunday night, Monday is definitely out because bad weather is predicted at every abort site. Tuesday may be a possibility, but really it sounds like if it doesn't go on Sunday as planned we'll be out of luck. 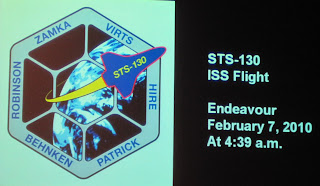 We also learned that there is a scheduled daytime launch on Tuesday morning of an Atlas Rocket. Since we're already here and have no definite schedule past the launch Sunday night, we will probably stay for that as well. The speaker said that would not be nearly as spectacular as a space shuttle launch, but would certainly be worth watching if we'd never seen one before. 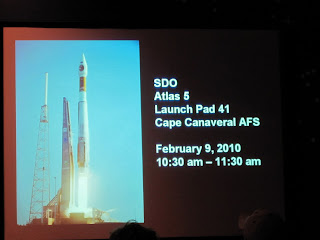 The rest of the day was spent browsing the many exhibits, including a fascinating exhibit of the Hubble Telescope. 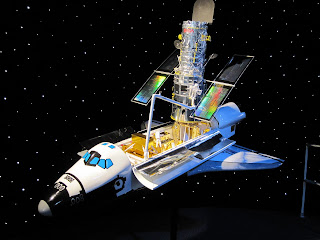 We also saw a second IMAX 3D movie, having seen one yesterday as well. We both love Imax movies, and these were included with the price of admission.
Another highlight of the day was sitting in the space shuttle simulator. You are shaken and turned and blasted with noise that is supposed to be very much like the shuttle take-off. It was so much fun we did it a second time. This might be a good time to mention how few people have been here over the past couple of days, which I guess is a sign of the poor economy. We've never had to wait for anything, even though they are set up for long lines. Some of the snack bars are closed due to lack of crowds. The movie theaters have been only about half full, and being able to go right back onto the simulator a second time without having to wait are all indications of tough times.
There are several ponds in the complex, and they have many alligators, not only in the ponds but also all along the highway leading here in the ditches along the side. 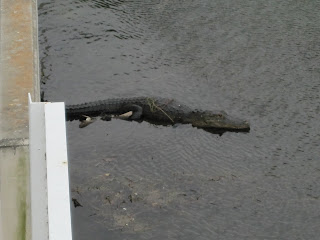 We ended the day in the Center for Space Education, which has classrooms and labs for visiting students. This building also houses the offices of the Astronauts Memorial Foundation, and the walls were lined with more memorials to the astronauts killed in disasters. One of the most beautiful things was this quilt made in memory of the Challenger. There were also books holding poems and letters of condolence from school children...very moving. 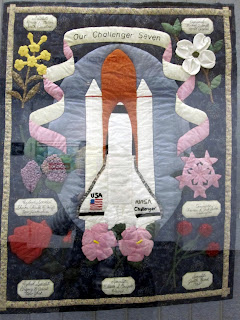 Today was a very blustery day with strong storms predicted for late this afternoon. Sure enough, as we left the Space Center and headed for our car the rain started and by the time we made it out to the highway it was pouring. I don't think I've ever seen the sky so black! As we slowed down and made our way back to the marina, we noticed many RVs parked alongside the road, already staking out their position for the Sunday morning launch. Needless to say, the excitement level is high!