Betsy speaks: After recuperating from the early morning Shuttle Launch Monday morning, we loaded up the car and headed to Orlando to visit my cousin Ben Newlin and his wife Rose. Unfortunately we relied on our trusty GPS to get us to their house instead of discussing it with Ben or checking a map first. Problem is the GPS isn't so trusty when a few days ago I had told it to avoid highways because I was going someplace on the bicycle! So what should have been less than an hour's drive on a major toll highway ended up being a two hour tour of Florida swamp land on back county roads! We knew we were wrong, but just never stopped to figure out how to get back on the right track, and didn't realize that the GPS setting was wrong until we were almost there. Still, we managed to arrive in time for Ben to take us all out to a relatively new restaurant for a wonderful seafood dinner. 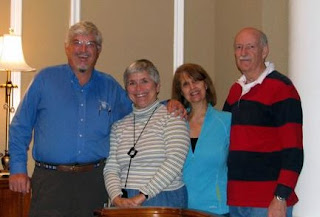 After dinner, Ben pulled out his guitar and a harmonica and I pulled out my cache of harmonicas and we had a short jam session. Ben is very musically talented and plays a wonderful guitar as well as writes songs and sings. We had a great evening getting caught up and getting to know them both better.
After retiring from a 30 year career with the Coast Guard, Ben went to work for Disney Cruise Lines as a top executive for 10 years. Now retired from Disney, one of his perks is free passes to all the Disney parks. So this morning we went to Animal Kingdom. The day started out as overcast and showers were forecast for this afternoon. We managed to make it through the safari ride before the rains came. What fun we had seeing the African animals in a near natural habitat, with a rhino crossing the road right in front of our jeep! 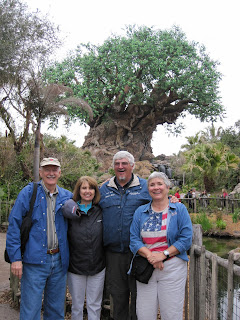 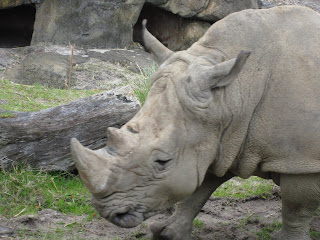 Close encounter with a Rhino! 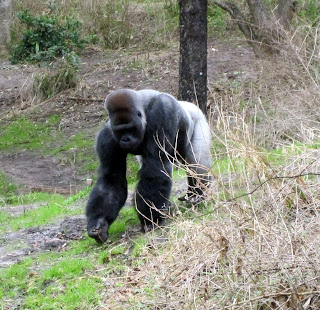 
As we were heading for the tiger exhibit in the Asian section it started to rain, so we decided to go to an indoor event instead. So we never did see the real tigers, but saw the Lion King production instead, complete with tumblers, stilt walkers, acrobats and musicians. It was a colorful and energetic show and very enjoyable. 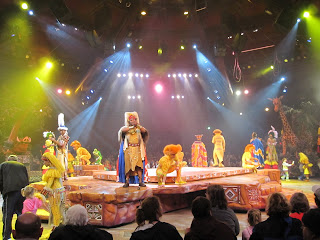 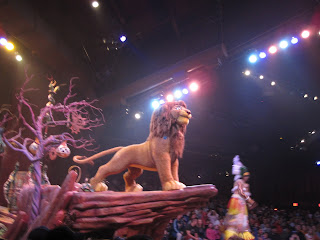 As we left the show, it was still raining, even harder now. So we went to another inside exhibit called It's Hard to be a Bug. This was one of the most enjoyable 3d movies we'd ever been to...lots of fun with special effects like bugs spitting at you, chairs shaking, etc. The 3d effects were some of the best we'd ever seen.
Our next stop was at the popcorn vendor as Rose had free tickets for popcorn and drinks. 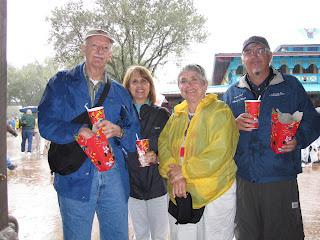 It was still pouring rain so we decided to head for home. We felt like we had seen the highlights. Ben has said over and over that he's just never seen weather like this in Florida: day after day of clouds and cold. Those of you that have been reading our blog regularly know that by now we take full responsibility for the bad weather as it has followed us since day one of the trip! 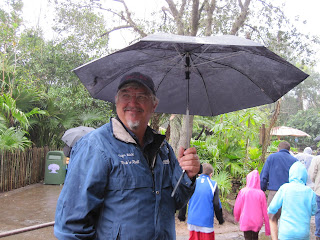 The rain was relentless once it started.

Back at the house, Ben was kind enough to relieve his tree of two bags full of beautiful pink grapefruit for us to bring back to the boat. Rose cooked a delicious dinner of lasagna. We talked a little politics, and then it was time for us to head back to the boat. Our trip home on the toll road was less than an hour! 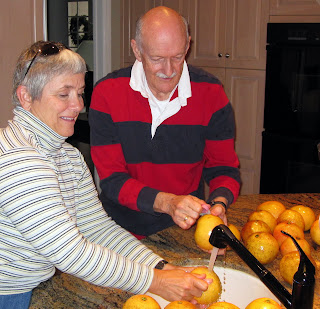 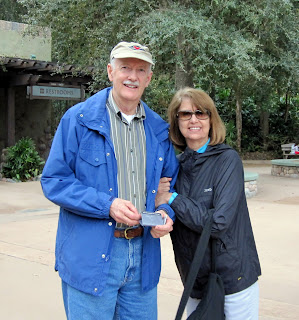 Cousin Ben and Rose were perfect hosts!
With the exception of our trip home in November, this was our first and only night in a real bed since we left home last May! 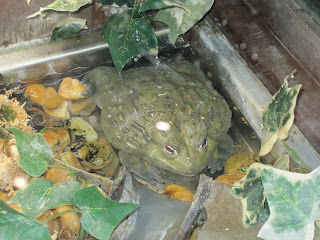 Personal note to our friend Toad...this one's for you!