Betsy Speaks: Prior to leaving the Edison/Ford summer homes site yesterday we asked one of the docents if there was a church nearby. She said if we wanted to go to an historic church there was one in the subdivision right next to the museum grounds. So we rode our bikes there to make sure we knew where it was and to see what time services were. 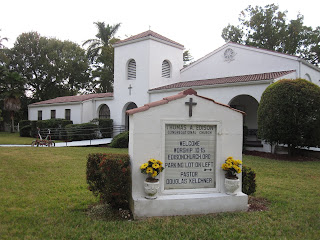 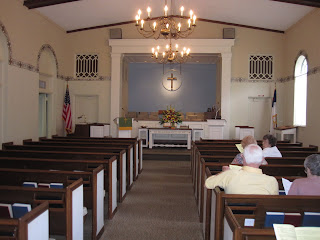 We arrived early and were greeted at the door by the pastor, Rev. Douglas Kelchner, who has only been here since December. The members we chatted with are very pleased with their new minister, as well they should be! We enjoyed him very much. Overall, I’d say this was as close to being like our home church, Sneads Ferry Presbyterian, as any church we’ve visited on this trip. One exception was that they didn’t stand for several of the hymns…I like to stand when I sing! The choir sang a lot…introit, solo, before and after the main prayer, and an anthem! And our favorite thing: fellowship with food following the service! 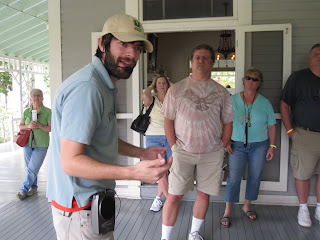 Leaving the church, we stopped at the Edison/Ford homesite again. Yesterday’s ticket is good for three days, and we wanted to take the guided tour today that we didn’t take yesterday. We were lucky to have a wonderful tour guide, a young man that was extremely animated and really knew his stuff. It was fun and educational listening to him, and I think we both picked up on several things we had missed yesterday when we just did the self tour with recorded info that you listen to with a speaker wand.

Mrs. Edison was a lover of flowers, and the grounds at the estate reflect that. Most 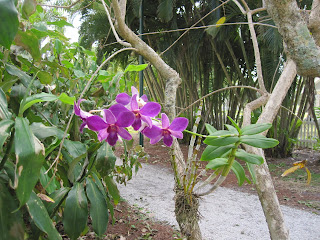 impressive are the hundreds of orchids, most of which are growing on Mango Trees. The Mangos line the entire front of the estate grounds, and in each tree are several orchids. Too bad the cold weather recently has damaged the blooms on most of them, but those few that were still blooming were spectacular.

As mentioned yesterday, the trees on the estates are also breathtaking. The various kinds of Ficus trees, from the magnificent Banyan to the most interesting Mysore Fig, are truly amazing and the Mysore is worth another picture. The roots are mostly above ground in a very interesting 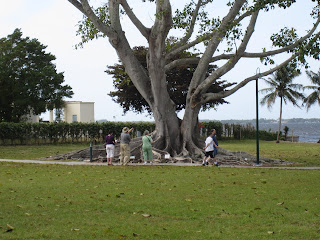 formation. According to our guide today, only a few inches or root are below ground. Yet the massive trees have withstood hurricanes and tropical storms for nearly 100 years. 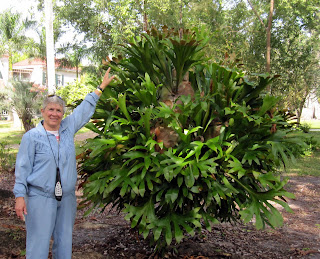 There are also many Staghorn Ferns scattered throughout the properties. Some are growing on trees, and several are huge hanging baskets, as the one pictured here which is about eight feet from top to bottom.

Rick mentioned yesterday that both homes now belong to the City of Fort Myers, but he didn’t tell how that happened. The Edisons had built their summer home themselves in 1886, and it remained in their family until Mrs. Edison deeded it to the city for the sum of $1.00 (yes, one dollar) in 1947. Henry Ford purchased the home next door for $20,000 in 1916, then sold it to the Biggars family for $20,000 in 1934. In 1988 the Biggars family sold it to the town of Fort Myers for $1.2 million! 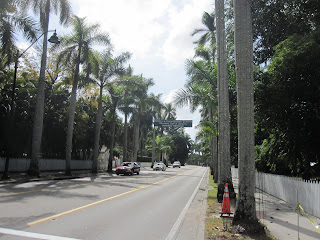 Thomas Edison asked the town for permission to line MacGregor Boulevard in front of the homes with Royal Palms and they said OK. So the palms were planted by Edison and have been continuously cared for by the town. Subsequently Royal Palms were planted for miles along the Boulevard in both directions, thus lending the nickname “City of Palms” to Fort Myers. It is a stunning corridor. There are also corridors of Royal Palms leading from the homes to the water.

It was another beautiful and warm day, though very windy this afternoon. We did have a little rain storm last night. Tomorrow we will head east on the Caloosahatchee River/Intracoastal Waterway toward Lake Okeechobee.