[Rick] We finally could take the cold and the wind no longer and we decided to move south. Not that 20 miles would be very different, but it is the principle of the thing. We decided to go to St Pete so we could be closer to the Chris Craft boat that is in St Pete. We plan to take another look at the boat tomorrow and by moving, the broker will not have to come to Clearwater and pick us up and bring us back. In addition, we had just about seen everything within walking distance in Clearwater.

The real reason we needed to leave was that Clearwater has fixed docks. With the Blue Moon and the high/low tides, the boat was often 5 feet below the dock and we had great difficulty getting ourselves and Beamer off/on the boat. We later decided to go to Gulfport, as it was a lot closer without having to go around the St Peter peninsula and they have FLOATING docks.

One of the reasons we were staying in Clearwater was to get my bike fixed. The new wheel finally came in and when I called this morning to check out my options, they said it would be ready this morning. About 1100, they called and said it was ready. I borrowed the dock master’s car (a nice Lexus sports car) and went to the bike shop and retrieved the bike. It was either borrow the car or ride the bus with several transfers hauling a bike. A new wheel, rear brake cable, and some oil on the seat adjuster cost $58. But, we were ready to go.

We filled up with gas, $3.35 per gallon, and left for Gulfport. The waterway is well marked and looks very much like the Atlantic waterway. Hugh houses line the waterway. 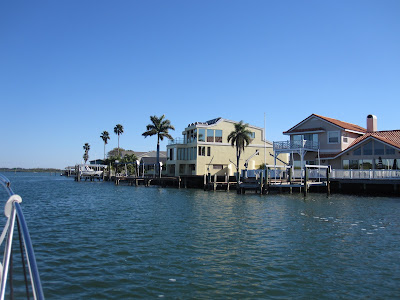 We arrived at the Gulfport Municipal Marina and were pleasantly surprised at how nice it is. Gulfport is a small town, floating docks, nice dock master office, decent restrooms/showers, and a very helpful attendant in the office. As usual, we are the smallest boat on the transient dock. 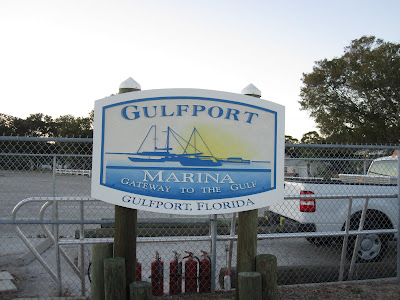 Our friend, Maurice, from St Pete rode the bus and his bike to have supper with us. We went to a local favorite, St Maddy's, and had very good food.

It is still cold, but we are at a floating dock, and all seems better. Tomorrow, we go back to look at the Chris Craft. 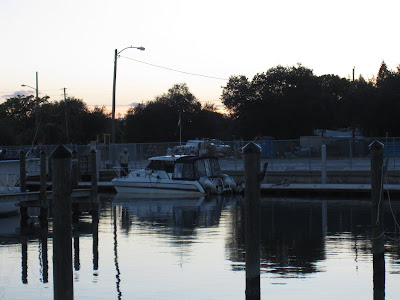 Note. For the past two weeks, we have had an interesting bird in the marina, one that neither of us had ever seen before. It is always on a line between two boats and we only see it at night. Betsy looked it up in a bird book she saw in a store today, and it turns out that it is a Black Crowned Night Heron. They are so smart, they only hunt and eat at night to avoid competing with the gulls and pelicans in the daytime. There is also a Green Heron that we see quite often at dusk and later in nearly the same location...they sort of compete for this particular line! Pictured here is the Black Crowned Night Heron. 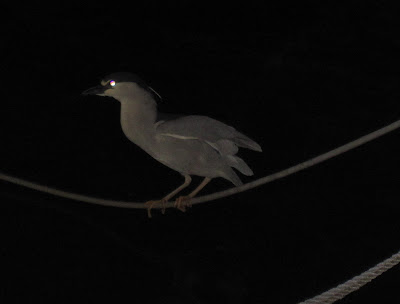