[Rick] Today started out like many other days. We got up. Showered, ate breakfast, cast off the lines, and left the marina for the next stop of the trip. In fact, Palm Island Marina was like many other marinas on the trip. Before leaving, we walked the docks and saw the largest Hermit Crab we had ever seen...the shell he was in was nearly a foot long! . We left for Punta Gorda, FL and a meeting with our loop friends Ron and Marji Cyr and Jack and Pia Griffin. Ron and Marji are residents of Punta Gorda and have a house on a canal in the city. 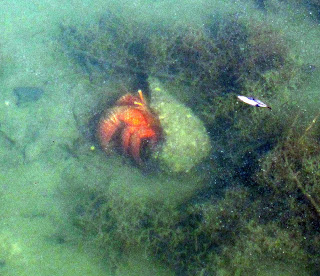 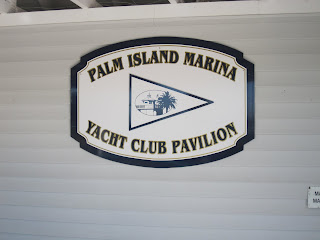 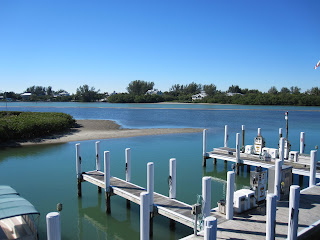 We had been traveling about 45 minutes when we heard a call on the VHF radio about a Loggerhead Turtle floating on the surface between markers 4 and 5. We were not sure where this was, as the markers reset between the bridges and it could be in front of us or behind us. This interested us as we are big supporters of the Karen Beasley Sea Turtle Rehabilitation Hospital in Topsail Beach, NC. We have seen the doctors and volunteers work mini-miracles with injured turtles. Some of our Sneads Ferry friends are volunteers with the turtle Hospital. Knowing that injured or sick turtles usually float near the surface, we wanted to be on the lookout.

When we came to the next set of markers 4 and 5, we slowed down to see if there was a stunned turtle there and sure enough, there it was. The boat that had made the distress call did not wait for help to come, so the turtle was not being protected in any way, and we were just lucky to have heard the call and seen the turtle. It was a young turtle, about 36 inches long and 24 inches wide. It was floating on the surface. After a minute, we determined that the turtle was alive, having seen movement of the flippers and raising its head. It appeared to be a young loggerhead. 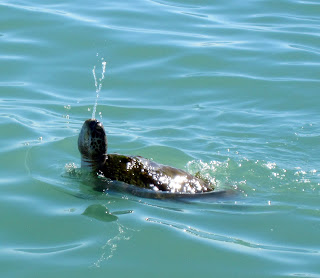 We looked at the local area brochures we had on the boat and rounded up several numbers for wildlife, usually to be told they were not the right people and to call another number. Several times we got recordings and had to leave a message. We finally reported the turtle and its position to a state wildlife officer. He called back and said it would take an hour for him to arrive, so he was asking for someone closer to come. They should arrive in about 30 minutes. We stayed with the turtle, keeping passing boats from hitting it. Luckily, there was little boat traffic due to the cold weather.
The turtle continued to float, occasionally raising its head and spitting water into the air. After 30 minutes passed, we called to ask if they were on the way. We were told that the first boat would not start, but a second one was on the way. In fact, the wildlife boat did arrive about 10 minutes later. The boat was staffed with two officers. They made several passes by the turtle. They finally succeeded in getting it into the boat where they covered it with a blanket and called a marine biologist on the cell phone. At this point, we made the assumption that the turtle would be taken care of and we left to continue our trip. We had spent over two hours trying to get help and guarding the little guy, but it was well worth it. We are confident that with some heat and some food, this turtle will be released into the water again and live a long and healthy life. 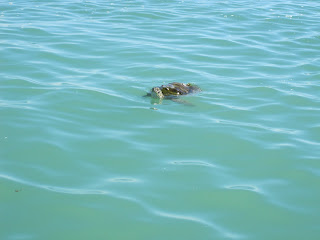 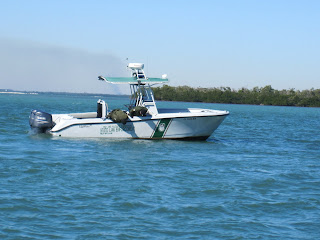 We arrived in Punta Gorda and Ron and Marji came out to meet us in their dinghy, AirMail. As they led us through a maze of canals to their house we saw many birds, including several Black Crowned Night Herons that we mentioned in the blog several days ago. Also we saw many Pelicans nesting in the trees along an area commonly called Pelican Condos by the locals. Finally we arrived at Ron and Marji’s beautiful home and tied up to the pier of the next door neighbor. He has graciously agreed to let us do so. Once tied up, we hugged Marji, Pia, and Jack. We gingerly shook Ron’s hand, having been told by Marji yesterday that Ron was still in pain from an accident about three weeks ago. He had gone out to his boat to get something, and as he was getting off the boat the stepstool to the dock broke and he took a bad fall, breaking three ribs and putting knots on his head and hip. 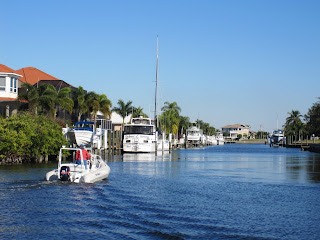 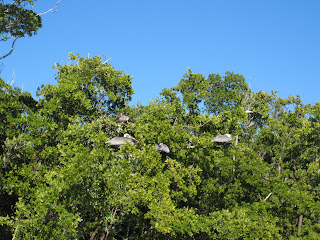 We had a lovely pizza meal with them for supper. We got caught up on all the latest looper gossip, news, and happenings. We will be here until Wednesday morning, when Jack and Pia leave. We will be right behind them as we make our way to Ft Myers.