10-08-09 A side trip to Guntersville
[Rick] Since we’ve been here in Scottsboro for several days, we decided to take the boat out for a bit. It was a perfect day, so we drove about 20 miles back to Guntersville, walked the town some more, and had lunch. When we first got there we were the only boat at the free public dock right downtown. By the time we returned, several looper boats had arrived and we visited briefly with old friends before heading back to Scottsboro.
10-09-09 Scottsboro and the tornado
We have been very lazy. Two looper boats that we’ve met previously arrived here today (Falcor and Carolyn Ann), as well as one that we hadn’t met before, although we do remember passing them on our way upriver and waving (Noah Genda). So we spent the day chatting with our friends here, reading, and piddling on the boat. Late in the afternoon, a huge black cloud covered the sky. It was moving very fast and for a while, we thought we would be bypassed. Then, we heard the tornado warning siren from the town of Scottsboro. A voice from the heaven indicated that a tornado had been spotted about 8 miles away and for everyone to seek a safe place. We, and the others from the other boats, abandoned the boats and went to the hallway of the marina office. The marina was closed, so about 15 of us huddled in the hallway leading to the bathrooms. Then, the rain, the thunder, and lightning began and lasted for about 10 minutes. The power went out, but fortunately one of the boaters had brought a couple of flashlights with him. Then it cleared up and was actually quite nice afterward. A siren indicated that the warning was over. We returned to the boat and watched the radar as the front moved eastward.
One weird thing happened as we waited in the hallway during the worst of the storm. We saw a man walking on the dock. He came to the hallway and asked which way to the boat ramp. We told him the ramp was a good distance away, and to get his friend still in the boat and come inside. He went back to the boat, a 16 ft Jon boat, got in and left with his friend toward the boat ramp. These are the people you read about in the newspaper after a storm. 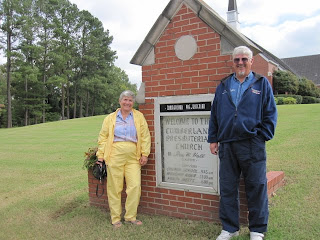 You will recall that the Presbyterian minister, Rev. Roy Hall, whose wife runs the wonderful restaurant at the marina, invited us to the Cumberland Presbyterian Church of Scottsboro. He told Betsy to be sure to bring a harmonica with her if we came and she said she usually had one in her pocket. Since we were still in town on Sunday, we did attend. The church was modest, with about 200 in attendance. Rev. Hall gave a very good sermon entitled “Here’s what to expect”. Every time we attend a church, there is something special happening, usually communion. Today, at Cumberland, they were installing Deacons and Elders. Rev. Roy asked 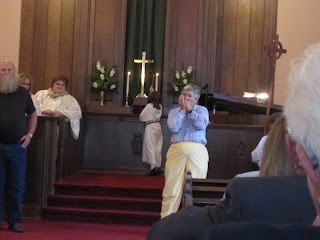 Betsy before church if she would play something as the postlude. At the appropriate time, she played “My Country Tis of Thee”. She received a very nice round of applause. Then, one of the members presented her with the flowers that had graced the front of the chapel. 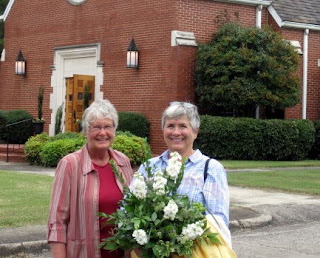 Our Canadian friend, Gayle from Falcor, attended the service with us, and Betsy gave the flowers to her, since we do not have room for them on our small boat.
We were going to Wal-Mart for flu shots but someone else had the car reserved and we could not get there in time. Oh well, we’ll get them somewhere else.
We will probably be here for a couple more days. There is nothing on the schedule and we really like it here. Monday and Tuesday are supposed to be rainy, at best.
There will not be a blog until we have something to report. We are killing time until the rendezvous on Oct 25. Remember that we were going up the Cumberland to Nashville. We decided not to do that and that gained us a week. Then, we were going up the Tennessee to Knoxville, but again decided not to go past Chattanooga. That gained us another week. So, here we are, killing time for two weeks. Tough life!