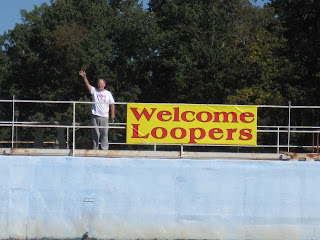 [Rick] After a hearty breakfast, including a $5.00 off coupon, with our friends from Falcor, Al and Gayle, and the harbor hosts, Jim and Sue Starke, we departed Bay Hill Marina for Florence AL. The sun had decided to appear and the temperature was warming up nicely. It was still brisk, however, since the overnight temp was in the low forties. When we left, Al climbed up on one of the barges that serves as a breakwater and waved goodbye to us. They are not going to the rendezvous, and leave next Friday to head for the Bahamas for the winter. So, there is a good chance that we will not see them again, especially since they reside in Canada, eh. 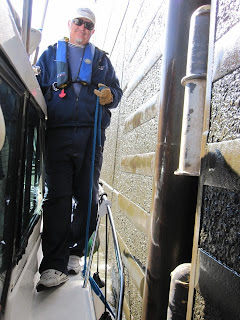 We had two locks to negotiate, both locking down. The first, Joe Wheeler Lock, was very quick and easy. We waited only about 5 minutes. The drop was 45 feet. So, the time to lock through was about 30 total minutes. We called the second lock, Wilson Lock, and were told that a tow was to arrive in 20 minutes, and it would take a total of 3 hours to get him through. We were 15 miles from the lock. We slowed down and just cruised very slowly to kill some time. We noted a small town with a marina on the RDB, Killen, and decided to go to the marina. It was up a creek about a mile. We docked, walked Beamer, ate some lunch, and walked around the marina. The marina closes from Labor Day until Memorial Day, so we had the place to ourselves. After a while, we restarted, rejoined the main channel and arrived at Wilson Lock. Just as we had been told, we got to lock through after a wait of 20 minutes, but at the exact time the lockmaster had told us earlier. Wilson Lock is a lift or drop of 93 feet. It took about 45 minutes to lock through, for a total of about an hour. Beamer helped with the locking chores. 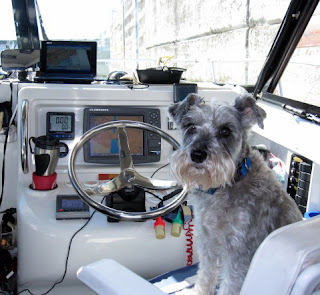 We continued to Florence Harbor Marina in Florence AL. We had stayed here several weeks ago. We will stay here for 3-4 days before going to Wheeler for the rendezvous. Unfortunately, the onsite restaurant, where we ate just a few weeks ago, is now closed permanently. So, we and another looper couple used the courtesy car to go to an Italian Restaurant. It turns out the couple, Barbara and Marty Christ, looped last year with our friends Lorenzo and Delois Johnson of Shallotte. Lorenzo is the person that sold us his charts of the loop that we found so valuable. It is truly a small world. There are several loopers here, so it will be more challenging to use the courtesy car, but we will survive. The free wifi here is very strong, so, we will catch up on Survivor and other shows while here.