[Rick] I have combined the blogs for Oct 6 and Oct 7. I wasn’t going to write a blog for Tuesday until I remembered that we went to Unclaimed Baggage, Inc. The rest of the day, we just relaxed and rested. 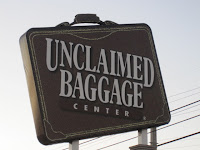 Unclaimed Baggage was begun about 30 years ago. In the beginning, it was the place where all unclaimed baggage from the airlines would be sent when the owner could not be found. At that time, you would literally open suitcases, rummage through them, and buy what you wanted at a very good discounted price. After all, the basis cost to the store was zero. I am told that it was not uncommon to get $600 watches for $30.
Enter the children of the founder. They decided that they needed a different business model. So, now, the place is a converted strip shopping center. It is one big store, with everything out for you to browse. It is much like a Big Lots. However, they now sell closeouts, overstocks, etc from businesses. After all, it is hard to imagine 100 pogo sticks came from someone’s luggage. Also, the bargains are not a great as before. New hardcover books are $6.00 and at one time were $.50. DVD movies are about $3.00 each, non returnable.
They have a museum of some of the “better” items brought in. This includes a space camera that belonged to NASA, later returned. There is 1770 violin and bow, in the original case. A bound book of a French newspaper from 1870-1873 is on display.
All in all, the Unclaimed Baggage store is a good way to kill an hour while waiting for the rain to abate. They have a second store in Boaz, AL, about an hour away.

10-07-09 Scottsboro, AL
We lounged around the boat most of the day. The only thing of note that happened was that we went to the local restaurant for lunch. They are normally closed, but the manager told us to come on over as she had two groups eating there. She was to serve meatloaf and fresh vegetables. It turned out to be two groups from the Presbyterian Church. The locals, Primetime, were from the First Presbyterian of Scottsboro. The others, Joy Club, were from Birmingham, AL. Betsy went back to the boat and got her harmonica and returned to play a few hymn selections for them. They sang along and seemed to enjoy themselves. We promised the minister that if we were in town on Sunday, we would come to the Presbyterian Church. The minister is the husband of the restaurant manager and the chef is their son.
The rest of the day was just resting and relaxing…….and another trip to Wal-Mart!
Pictures of the Goose Pond Marina: 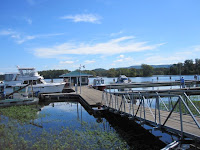 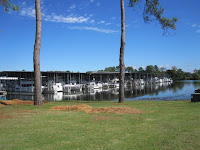 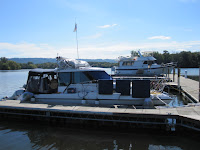 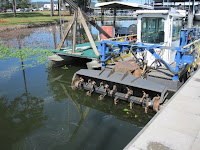