Ottawa. It is an older church, and like Sneads Ferry Presbyterian, is very casual. Even the preacher was casual, wearing casual slacks, a shirt and tie. There were about 125 in attendance. From the announcements and commentary, it is pretty obvious that this is a busy church, supporting a missionary effort and many community projects. The message was “Let every creature with a voice, praise the Lord”. Being the first Sunday, communion was served. The normal method was intinction, but due to swine flu concerns, the alternate method of individual small cups and wafers was present and acceptable. They had a fellowship time after the service and today was sundae Sunday, with each person making an ice cream sundae to their liking.

Supper was a cookout with hot dogs and hamburgers. There were several drawings with the proceeds going to charity. There was a 50-50 drawing, but the main fund raiser was a rubber duck race. Five dollars for a duck or twenty-five for a six quack. The ducks were released and the winner received $500, $250 for second, $100 for third and $50 for last place. A cute young girl won the $500. She was very happy.

A note about this very nice marina. Many people keep their boats here in the summer. Since the summer has had such bad weather, and this is the last real weekend of the summer, it is packed. People cooking at the grills, chatting with their neighbors, taking the boat out for a spin. There are probably 500-600 people here including children. There is a separate building with games, TV, etc for the youngsters. Many have pets. So, the marina tries to have some entertainment for the boaters each weekend. Usually it is a band, as it is tonight. All in all, this is a first class, fun marina. The personnel are excellent and seem genuinely interested in pleasing the boaters. The only thing missing from this marina is a laundry facility. I feel sure they will they are held up by the permitting process. 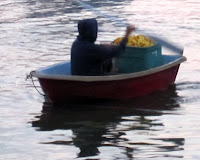