[Rick] What do you call a day that gets you past the Carpel Tunnel, bypass 2 locks, pass the port of Joliet, IL and the commercial traffic, does not involve the US Coast Guard, and does not cost $600 for the tow boat to take you 0.7 miles, with a risk of blowing up. I call that September 3, 2009, a great day!

We said goodbye to the Marine Service Corp Marina, where we took over the working dock. After 6 nights, we looked more like the Clampetts than ever!

We also said adios to all our looper friends who are captives of the carpel tunnel. Most are making plans to leave tomorrow or Saturday. The Coast Guard is to issue some type of statement on Friday, but it has little chance to just open the river. More likely is to continue to 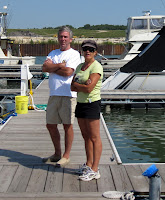 have boats towed through. There is a chance they will CLOSE the river permanently, but this seems unlikely. There is also the slight possibility that they will not let gas powered boats through even if towed, so two other looper boats that are gas powered are especially anxious to get through before that possibility becomes reality. This is Jack and Pia from Charlotte, NC.

You will recall that Glenn, a resident of this area, has a Glacier Bay boat and more importantly, a trailer. He called several days ago and volunteered his trailer and tow vehicle, a Lincoln truck, to portage us around the carpel tunnel. Today was the day. Glenn met us about 10 miles down the Cal-Sag Canal, loaded the boat, and took us to Morris, IL, approximately 50 miles via interstate much of the way, for launching. At this point, I tried to pay Glenn for his efforts, but he would not take a penny. We asked for his favorite charity, so we could make a donation. We finally settled on a sweatshirt from North Carolina when we get back home.

Glenn went back home, and we continued down the river 10 miles to Seneca, IL and the Spring Brook Marina. Very pretty marina. No Wi-Fi, but they have cable TV, so not too bad. Later we received an e-mail (we used our air card to access the internet) from Glenn, telling us that he was home, no problems, and wishing us safe travels down the river. Tomorrow, we go through a lock on our way to Heritage Harbor Marina in Ottawa, IL, where we will stay over Labor Day to avoid the holiday crazies.

Betsy adds: How can we ever thank Glenn? What a Good Samaritan! He just happened to read the Glacier Bay user’s forum on the right day, after not having read it for months! In spite of his protestations, we do intend to make a donation in his honor to charity…if any of Glenn’s friends are reading this, please let us know of a cause that would be appropriate!

But here’s the MOST incredible thing that happened today: Beamer the psycho dog hopped in the back seat of Glenn’s truck, settled down on the floor, and never made a sound for the 50 miles he took us!!! This is incredible for Beamer! She was the perfect passenger. She will be 10 years old in about a week, so maybe she is starting to show her age! As soon as she got out of the truck, she did give him a little growl, but by then he was so impressed by her behavior it didn’t matter.

I look forward now to weeks and weeks of stress free boating!