Betsy speaks: Sorry we’re late with the blog! Some days we just have nothing to write about…other days we’ve stayed so busy we are just too exhausted at the end of the day to write about it. Saturday fell into that latter category. 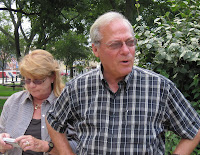 We joined fellow loopers Evan and Pookie Davis for lunch at Cracker Barrel – our first time there since leaving home! It was so good to be eating good old southern cooking that we not only ate lunch, but we got supper in take-out bags for later.

Then we ventured to downtown Ottawa, Illinois for a little sightseeing. Ottawa was the site of the first Lincoln-Douglas debate, and was also where good ole Abe practiced law for a short period of time. So naturally there is a very impressive statue in the downtown park commemorating the debate. 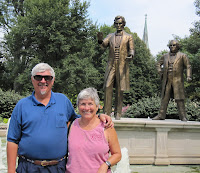 This was a beautiful park with a nice war memorial for combined World Wars, Korean War, and Vietnam War. More impressive, however, was the memorial to the Civil War dead from this area. It was a very tall obelisk on which hundreds of names had been carved. But over the past 150 years those names had been so worn down by the elements that they were no longer legible, similar to a very old grave stone. The monument was “rededicated” in 2006. Each of the 810 names that were on the original monument are now clearly legible on the six or eight flat granite markers that now surround the monument.
A few blocks away is another very small park that has a wonderful artsy display of metallic “stove pipe hats” all colorfully painted. The images are patriotic, and many of them have Abe Lincoln quotes. Wow, what a wonderful speaker he was! I read every word of every quote.

Scattered throughout the downtown are marvelous murals on the sides of buildings. We’ve been to several towns on this trip that have downtown murals, but I think these were the most impressive we’ve seen.

We were expecting at least two more looper boats to join us at Heritage Harbor Marina before the day was over. When they were not yet at the marina when we returned we thought maybe they had been held up somewhere along the way. They finally showed up as we were eating our Cracker Barrel takeout, after 6PM. Sure enough, they had to wait through a couple of lock cycles. With this being a holiday weekend, combined with the bottleneck at the “safety zone” just a few miles upstream, the river is very congested. Anyway, we were glad to be joined by friends Jack and Pia on “Still Busy” and Ron and Marji on “Meander.”
Let’s back up a day. Those two boats had been towed through the safety zone on Friday morning. Prior to Friday, boats that were towed through were towed one at a time, cost $600 each. On Friday, the powers that be decided it was OK to tow boats through two at a time, one on each side of the barge. I wish we had been there to see Pia try to talk the barge captain into charging them only $300 each since they were coming through together. Pia is Finnish, and she is a pistol! Petite, very pretty and very self assured, I can just see her using her charm to save $300. But it didn’t work, so the towing company is now making $1,200 for about 15 minutes of work!
The marina we are in now is very nice, and they have bands and activities every weekend for the folks that are here. The band that was supposed to play tonight didn’t show up, so they had to come up with some other activity. They have a children’s activity building here, so they “borrowed” the two Wiis from the children’s center and set up a Wii Bowling Tournament last night. It was a blast. Rick and I along with Pia (a Finnish Gold Medalist in Bowling in her younger days) all joined up to play. After watching the fun, Ron also filled in to complete a team later in the evening. There were 9 teams of 4 bowlers each. What fun we had!! The team Pia was on ended up winning the overall team competition so she won $45.
Below, Ron and Marji, Rick, and Jack watch Pia's form! None of us had done much Wii before (I’ve done just a little, the others none at all). We were all so surprised at how realistic it is! Just like being in a bowling alley…great fun! Rick was proud of his 176 after not bowling for nearly 20 years! I had a measley 135.

By the way, this is the marina that became “famous” to last season’s loopers, collectively known as the “River Rats.” When the Illinois River was closed last year due to flooding, many loopers were stranded here for several weeks. There is a mark on one of the pilings supporting the floating docks showing how high the water was. It is amazing to see how high it was, and boy were those people lucky these are floating docks! Pictures below show Rick on dock pointing to red mark, then a close up showing how near the red mark is to the top of the post…about a foot from the top.

Glad we missed out on that excitement...being Carp Captives has been exciting enough!
It was well past our bedtime when we returned to the boat, and we planned to get up early the next morning for church at 9:30, so that’s why this blog is a day late!