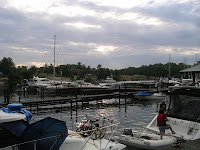 We began the day thinking we would leave Killbear and go up to Parry Sound. This would be about 12 miles one way. Parry Sound is the largest town in the bay and has most everything as far as supplies goes. We also know that one of our friends, Jimmy Tant on Riff Raff, is there, waiting for his wife to join him for a couple of weeks.

We were told earlier that Will, the owner of Killbear, has a nose for and knowledge of weather in this area, and whatever he says, do it. So, before leaving, we talked to Will, the oracle, and asked if we should go to Parry Sound. He said “No, it is going to be raining in 30 minutes with thunderstorms later in the day”. So, we did not go. In about 30 minutes, it was raining and in two hours, it was raining cats and dogs. Score another one for Will.

So, we waited out the rain in the boat, reading (Betsy finished yet another John Grisham book), writing blogs, playing Sudoku, dozing, and whatever to pass the time. It would lighten every now and then, but went back to raining hard until about 1800. Then the sky lightened and we had a perfectly beautiful sunset. 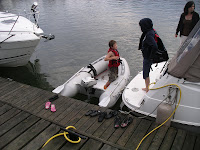 There are several weekend boats here today and the children on these boats run around on the dinghies as if they were bikes. They are very skilled in the operation and all wear life jackets. Up here in Canada, a license is required to run any motorized boat, so a 10 year old will have a license.


All in all, a pretty lousy day, but we got through and plan to leave tomorrow for Pointe Au Baril, assuming Will gives the OK.

Here are a couple of interesting shots: 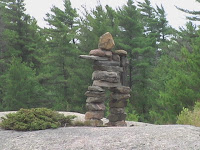 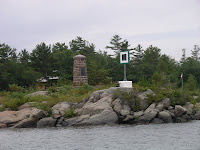