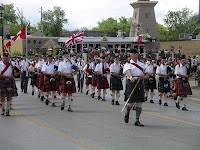 We are still in Orillia, and one reason we stayed here for several nights is that we knew there was a Scottish Heritage Festival this weekend. I don’t know that either of us has any Scottish blood, but we’ll stick around for any festival! 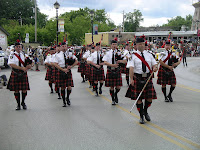 Over the past several days we’ve heard bagpipes in the far distance every night, practicing up for the big day. Well today was the big day. We are docked right next to the park where the festival is, right at the bottom of the hill on the town’s main street. The Scottish Heritage Festival Parade started promptly at noon, and we had front row seats. I didn’t count how many pipe and drum bands there were, but my estimate would be at least 30 or 40. All were playing different tunes (although they all sounded pretty much the same), and I want Howard to know that I really, really enjoyed it. I don’t know that I’ve ever heard a real, practiced pipe and drum band before, and these were great! 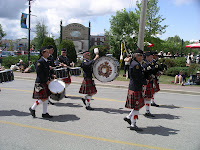 The bands were from all over Canada, many representing police and fire departments, some representing schools, some just representing pipe and drum clubs. They were obviously all very serious about what they were doing. Having been a former parade marcher myself (way back in high school days), I thought there formations were excellent…nice straight lines, all marching on beat. 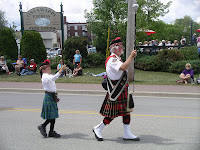 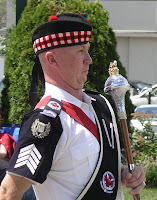 The front men (in a band we call them drum majors, I don’t know what they are called in a pipe and drum band) were so serious, very somber faced! I got a real kick out of the one little boy that was following the major, imitating him. I was impressed by the number of young pipers there were. 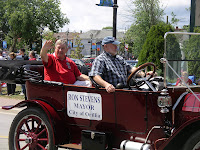 The parade went on for about 45 minutes, and I was sorry to see it end. In addition to the pipe and drummers, there were Shriners riding around in their funny little cars with their funny hats on, and local dignitaries in antique cars. 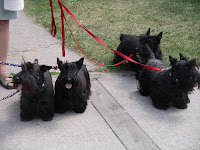 Even Scottie Dogs came out for the festivities. Here is a mama Scottie and her 3 daughters, one of which is pregnant (they hope).
Now I’m sitting on the boat, but in the distance I still hear bagpipes. There is some sort of competition going on, but its about time for us to pull out and head over to the casino 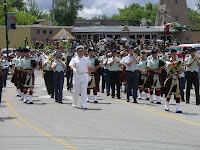 So, Howard, I take back all the bad things I said about bagpipes!