Betsy speaks – We went through 4 locks today, for a total of 33.2 miles. We stopped along the way in Buckhorn for lunch, eating again at a picnic table right next to the lock, all part of beautiful and well run Parks Canada. 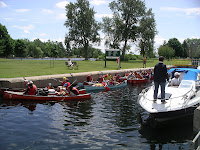 As we finished lunch, we saw many canoes approaching the lock. They pulled over to the blue line, which meant they were going to go through. They were fairly well spread out, we saw 4 or 5 at first, but then they just kept coming. Each canoe held 3 young teenagers, along with plastic garbage bags full of gear and clothing. They were well weighted down, and the kids were having a hard time controlling them. The final count was 21 canoes that went into the lock at the same time, and we heard the adult in charge tell the lockmaster there were 3 more stragglers. The lockmaster 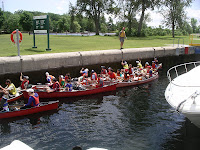 said they would have to catch the next opening, as there were boats waiting as well. This is a very busy lock, and one of the very few where the lockmaster has a loud speaker to tell boats what he wants them to do.

So here are 21 canoes, 7 rows of 3 each, holding on to the right hand wall of the lock, along with 3 boats on the left hand side. As they were going down, the lockmaster asked “which one of you is going to lick the wall this year? Last year someone took chunks off 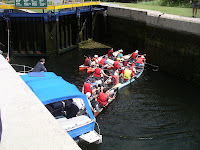 the wall and actually chewed them!” Now, these lock walls are covered with disgusting slime, literally dripping off the wall. Apparently it is customary for some of these kids to lick the wall each year (the lockmaster told me later this is a once a year thing for this camp). Anyway, one of the boys licked the wall, then turned around to spit. This caused uproars of laughter and they got so carried away that someone let go of the wall. The first two rows of 3 canoes each ended up floating away from the wall toward the boats on the other side. They were very inexperienced paddlers and had no clue how to get back to the wall. Their counselor was up on the wall yelling at them to pull the paddles toward the canoes to sidle over to the wall, but it was fruitless. Pure mayhem! 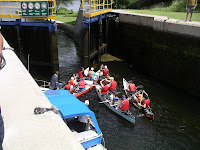 Once the lock was down, the lockmaster slowly opened the doors, the canoes all floated out without any control at all, with the counselor up top yelling at them to grab the wall as they left so they could wait for the 3 stragglers that were now waiting at the top of the lock to come down with the next opening. There was a slight bend in the wall, so we really couldn’t see the final outcome, but I’m sure it wasn’t what the counselor had in mind. We hear this camp costs $3,000 per child per week. I wonder if the parents of these kids have any idea what was going on! The kids did all 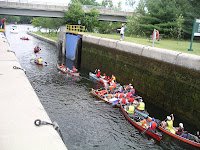 have on life jackets, but the canoes were way overloaded, the kids did not know how to paddle well enough for this undertaking, several had already swamped (I saw one girl in the bathroom using the hand blow dryer trying to dry out her clothes…she told me her canoe sank from having too much weight in it. Several of the kids were dipping water out of their canoes as they were in the lock.

It was a very windy day, and the water was very rough in places. 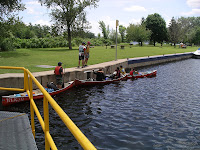 What a story these kids will have to tell, if they survive! I remember well learning how to handle a canoe when I was at Girl Scout camp in my youth, but I don’t think we ever did anything like this!

This is a picture of the final 3 stragglers waiting for their turn to lock through as all the rest are trying to wait for them at the bottom of the lock.

This is only one of the shivering kids that had been "dunked" by an overloaded canoe!

We finally left Buckhorn and crossed Pigeon Lake heading to Bobcaygeon. Again, it was a very windy day and the lake had a stiff chop. It wasn’t a problem for us, but we did try to radio our friend Maurice in his 21 footer to warn him. By the time we reached him he was at the point of no return, and ended up pulling into Bobcaygeon several hours behind us.

The creek leading to Bobcaygeon was one of the prettiest things we’ve seen. Quiet and peaceful after the lake crossing, beautiful homes on each side, beautiful landscaping. We had met some Bobcaygeon residents during our trip that were finishing their loop, after 2 years. They reached home about 4 days prior to our arrival. They had told us to be sure to look them up once we 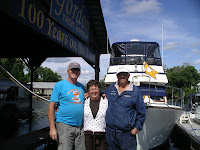 arrived, but I wasn’t sure how we were going to do that since we’ve disabled our cell phones. We had e-mailed them thinking we would arrive in Bobcaygeon on Tuesday, but we actually arrived Monday. As we approached the lock, we passed a marina and I saw their boat. Thinking I saw someone on the boat, I tooted the horn, and sure enough there was John. So we pulled over to the marina and Gail also came around the corner. They were proudly flying their gold AGLCA burgee, which you get once you’ve completed the loop. We chatted with them for a while, and arranged for them to come to our boat later in the evening as it was John’s birthday and they already had dinner plans.

They stopped by after dinner and shared a drink. Then we arranged to have breakfast with them the following morning. 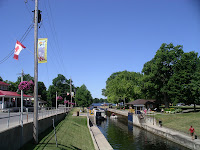 Bobcaygeon is the site of the very first lock built on the Trent-Severn. It is a lovely little town with wonderful shops and restaurants and a nice museum. We are spending the night here on the wall. Tomorrow a marina will be in order because 2 days without a shower is enough.

I am constantly in awe of how beautiful the Canadian waterways are. The scenery day after day is just breathtaking. We keep reminding ourselves it is only good for boating about 3 or 4 months out of the year. 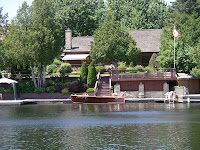 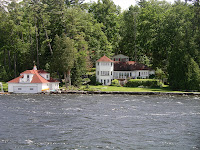