Betsy Speaks: Our goal for today was to pull into our home at Topsail Beach at approximately 2:00, and we had mentioned that on the blog a few days ago. That post prompted an e-mail from someone who has been following our blog right from the very beginning. “Bam” is a person we’ve never met, but he is a friend of a friend. Our mutual friend had told him of our trip early on and he has been a virtual crewmate ever since. Bam and his wife Ann keep their boat in a marina not far from our Topsail Beach destination. Upon seeing that we were heading for Topsail before officially crossing our wake in Sneads Ferry next Sunday, Bam e-mailed us and wanted to meet us on the water today, take us to lunch at Wrightsville Beach, and then sort of escort us on to Topsail. Well, those of you that know us know we never pass up a free meal, so we agreed to meet Bam and Ann just south of Wrightsville Beach, an area we are all very familiar with, and go to The Dockside Restaurant for lunch before heading on to Topsail. Bam and Ann actually took off work today to do this for us.

We left Southport right on schedule this morning, about 10AM with the wind behind us and the current in the Cape Fear River at just about zero. This was to be our final body of water that we knew could get very rough, and we were glad we picked the perfect day to make this crossing, as the water was virtually flat. We estimate the wave height to be 2.54 centimeters. 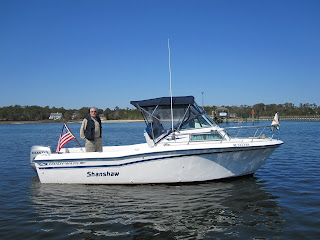 We met up with Bam just before reaching Wrightsville Beach and cruised on in to The Dockside. Rick and I docked and tied up, then Bam came in after us. Rick ambled over to the slip they were heading for to help with the lines. Then disaster struck! Bam sort of veered away as he was approaching the dock. There was another boat next to where Bam was docking and Rick, afraid that Bam was going to hit that other boat, leaned out and grabbed his bow rail. I was right behind Rick and I could see exactly what was going to happen and it was sort of like slow motion. Ann tossed a line from the stern, but it hit the dock just a second too late. As the bow 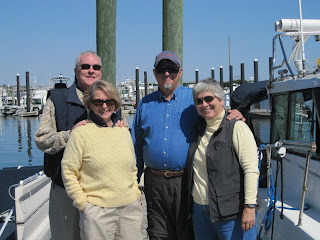 drifted away from the dock, Rick held on until he was nearly horizontal and couldn’t stand back up. Needless to say, he ended up in the water, but fortunately still had both hands on the bow rail. He calmly said “I’m holding on, just get me to the dock. By then I had him by the wrist, and a couple of guys ran down the dock and we immediately got Rick out of the water. All I could say was “6,000 miles and this is the first time either of us has hit the water!” 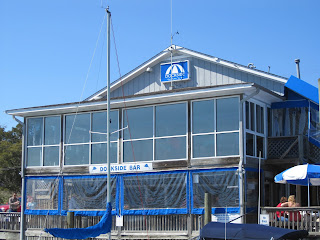 We considered not mentioning this mishap because it is sort of embarrassing. But those of you reading this know that after all we’ve been through, we are experienced boaters, so there is no way this was our fault! We blamed Bam completely for doing such a terrible job of docking the boat, and he was more than happy to take the blame! Fortunately, we had plenty of clothes on the boat so Rick just went and dried off and changed clothes and we went to lunch and were more than happy for Bam to pay!!

Now we have to look on the bright side. Not only do we have someone other than ourselves to blame this on, but Rick did not have either his wallet or his cell phone in his pocket. I had them both in my hand ready to give him when this occurred. Also, Rick had already taken off his inflatable life jacket, which both of us always wear when underway and during our docking process. Since he didn’t drown, in retrospect we were glad he had already taken it off because it meant we didn’t have to replace the cartridge. {Rick interjects: Thank goodness there are no pictures of this incident.}

Once dry, we had a delightful lunch, filling in Bam and Ann on some of the details of the trip. After lunch we pulled away from the dock first…we wanted to get out of there before they even started their motors because we know they are dangerous! (Just kidding). We cruised on toward Topsail a little slower than usual just savoring the almost final leg of our wonderful trip. 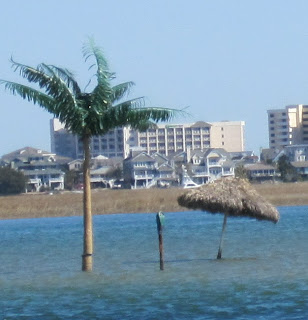 We knew we were close to home when we passed the familiar sandbar with the plastic palm tree and the parking meter just north of Wrightsville Beach. Bam and Ann followed us down the waterway and through Topsail Creek and into Topsail Sound. Now here’s a little something else about Bam and his boating. I mention Topsail Creek, as that is what we locals call it. It is on the chart as Howard’s Creek. But Bam refers to it as “that little squiggly creek!.” Anyway, they continued on when we made the turn into our little cove behind a sandbar that could have meant trouble for them since they were unfamiliar with this very shallow area. 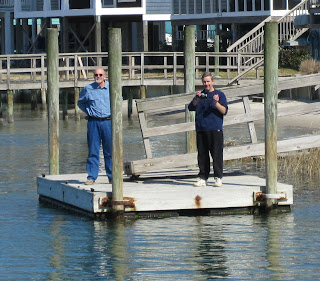 Even though this is not the official end of our trip we did have a small group at the dock waiting for us. One of my brothers had come from Raleigh to greet us, and a couple of neighbors were there as well. Pictured here are my brother Steve and my friend Capt. Michael Nelson. Michael is a high school classmate of mine that lives nearby here at Topsail and has followed the blog daily. Steve and Michael helped with the lines as we docked, and no one ended up in the water this time...remember, Bam was gone by now!

Champagne, compliments of my dear friend and daily blog reader Bill Morrison, was delivered by Michael and we toasted our return to this place. Next Sunday when we officially cross our wake and pull in to Sneads Ferry we’ll probably celebrate some more, but for today this was very special. 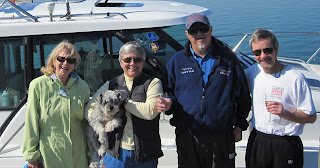 Pictured here are my lifelong friend and also a highschool classmate Bonnie Hood, me with Beamer, Rick, and my brother Steve.

Over the past couple of days I’ve choked up a few times thinking that this adventure is almost over. I’d thought of what I’d say in future blogs, especially in the days we have to kill between now and next Sunday. We want to keep blogging 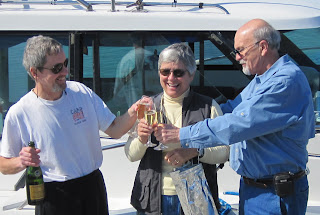 so people will keep reading until the very end. One of the blogs I’d written in my head was going to be that we went 6,000 miles and neither of us had ever fallen in the water, and Beamer the Psycho Dog only went in the water once (on the Tennessee River as she squirmed while being lifted back onto the boat. Getting her on and off the boat was often one of the most challenging things we had to do). But Bam blew that blog! We’ve met so many wonderful people along the way and made some wonderful new friends. Then today we met Bam! Is this really going to be the last person I meet on this trip?! I just can’t let it end this way. I’ll just have to do it again!

And guess what! Bam and Ann are going to come out again on Sunday, along with more friends in their boat, and escort us on up to Sneads Ferry! Stay tuned to see if we have any more exciting adventures on that final leg. You can believe we’ll have our life jackets on for that final docking!