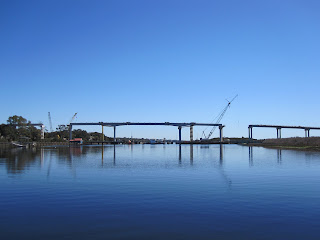 [Rick] We moved on from Dock Holiday’s Marina and headed for Southport, a trip of 40 miles. The weather was very nice with the temperature in the mid 60’s. There was very little wind. We arrived at the Sunset Beach pontoon bridge and were very surprised at the progress of the new fixed high-rise bridge. Only two of the sections are missing and we were told that the bridge should be finished in 4-6 months. The old pontoon bridge is a one lane bridge with controlling traffic lights at each end telling the traffic when to go. We know that there is some controversy about the bridge among the residents of Sunset Beach, but for our part, as a 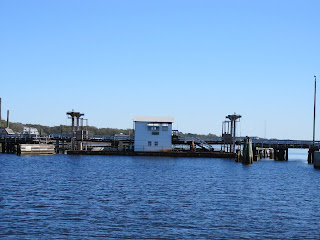 boater, the new bridge cannot open too soon. With a vertical height of only 4 feet, the old pontoon is only the second bridge we have had to wait for and request an opening since the beginning of the 6000 mile loop trip. A real problem is that at very low tide, the bridge cannot open, and that really backs up the boaters. We had to wait only about 15 minutes. We knew ahead of time that the bridge only opens on the hour, so had arranged to be there in plenty of time, but not too soon. 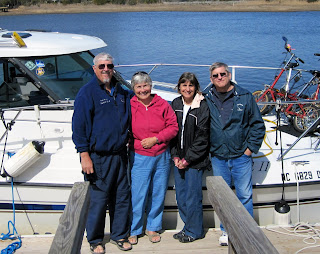 You will recall that Dolli visited us yesterday. Upon returning to Lumberton, she called Darrell Evans, another BB&T retiree, who just happens to live on the Intracoastal Waterway and told him that we were on the way. We received an email from Darrell extending an invitation to stop at his dock and visit a while. He gave explicit directions to his dock. So, when we reached Oak Island, we pulled over and tied up. Darrell and his wife, Johanna, welcomed us and gave us a tour of their home. This is a house they had built over 20 years ago, and now that they are retired and living here full time they are doubling the size of it. We had a wonderful time, but, as always, we had to move on. 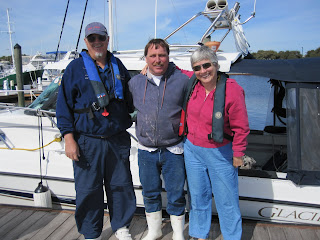 We arrived at the Southport Marina and called on the radio to find where we were to dock. As we pulled in, we saw someone waving frantically at us from a fishing boat tied up getting fuel. The boat, “Speckled Trout”, is captained by Jerry Elliot, one of the members of our captain’s class a couple of years ago. He is a commercial fisherman and a great guy. What a great surprise to see him. We know we’re getting close to home. Most importantly, he was wearing Sneads Ferry Sneakers.
The marina is very nice. The management has spent a “boatload” of money in the past three years on the facilities. The floating docks are very nice and they have all the “required” amenities: wifi, cable, and great restrooms/showers. In addition, we know that Southport is a charming place to visit and spend some time.

We will leave here tomorrow about 1000 so as to take advantage of the current as we traverse the Cape Fear River. While the distance across the river, from Southport to Snow’s Cut, is only 14 miles, the river can be choppy and downright uncomfortable when the wind and current are in opposition. We intend to be in Wrightsville Beach around noon and arriving at Topsail Beach around 1400-1430. 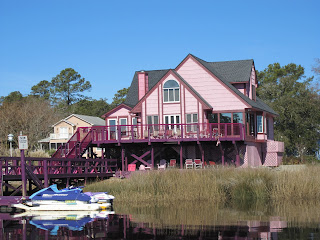 One of the houses in Myrtle Beach. 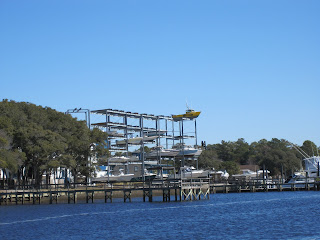