[Rick] Yesterday, while at the Isle of Palms Marina, we spent the day in the boat. It rained most of the day and the temperature was about 50. So, it was a perfectly miserable day. We did take this cute picture. The people along here are intense about wake damage. I wonder why they purchase property on the waterway and then do not want any boats to go by. 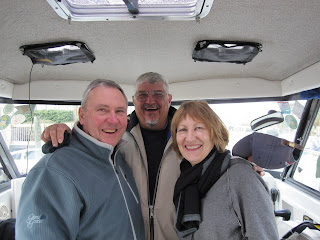 Today, we decide to make our way north and prepare to leave. Just before we left, we had visitors. Sue, the daughter of one of our Topsail Beach neighbors, along with her husband Gary, paid us a visit on the boat. Sue and Gary had rented a cottage at Isle of Palms and her mother, Del, who reads our blog daily, told her that we were here and so they came to see us. It was quite a nice visit. They stayed about 30 minutes and we caught up on the children and grandchildren. If they had showed up three minutes later we would have been gone!
We left at 1030 heading for Georgetown, about 65 miles away. The weather was very nice, little wind and not too cold. Due to the desolate nature of the terrain, we made very good time averaging 17.2 mph. In fact, as we approached Georgetown, we decided to keep going to Myrtle Beach. Just before Georgetown you must cross the rather large Winyah Bay. With winds forecast at 15 MPH the bay could have been quite rough, but as it happened it was smooth today so the crossing was no problem.
Once past that obstacle, our goal was now Osprey Marina, about 20 miles south of Myrtle Beach. As we neared Osprey Marina, we were making such good time that we went on to Barefoot landing. We had intended to stay at Barefoot Resort, but they were closed when we arrived. So, we just went across the waterway to Barefoot Landing. The rate there is only $1.50 including electric. They have good Wifi. However, they have no showers, so we will be moving on tomorrow to another place in Myrtle Beach. In total, we went 105 miles today in 6 hours. It was a great day to be on the water. 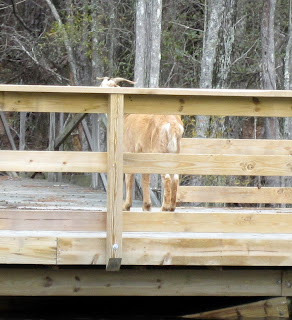 Along the way, we saw a dock with a goat. Something you do not see everyday.