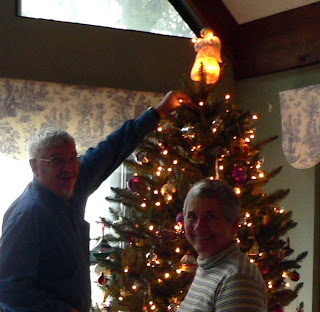 (Betsy speaks): We spent the day with Tom and Patsy Conrad again in their wonderful home which we have dubbed "Tom and Patsy's Dock & Dine." We did stay on our boat last night and as the night wore on the water got rough. There was a terrific thunder and lightning storm so we’re glad we stayed on the boat because Beamer the Psycho Dog is at her psychotic best during loud storms.

We awoke to a very cold day with high winds which lasted throughout the day. I helped Patsy with some more decorations, so am really starting to get in the Christmas spirit. Mid-afternoon Tom went outside to do something, and then we noticed him running to his boat. As it turns out, the high winds had caused his boat to pull so hard on his finger pier that a piling 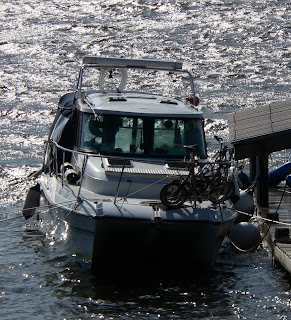 actually broke and an eight foot section of his finger broke loose. Rick and I immediately ran out to help Tom. Rick and I did our best at holding his boat off the dock while Tom lassoed another piling farther out to hold the bow away from the dock. It was a harrowing 15 minutes or so that seemed much longer. Of course, one reason Rick and I were anxious to help was that if Tom’s boat broke loose it would have rammed right into ours, and then who knows what would have happened! 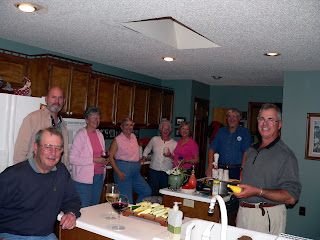 This evening five other loopers joined us for dinner. We had just met Theresa and Larry off of “Lauren Grace” yesterday when they rode with us to West Marina. Also joining us were Ann and Hank off of “Queen Ann’s Revenge,” who we think we met or at least saw at the rendezvous several weeks ago. The final new person joining us was Tom off of “River Rat.” We had seen his boat at the marina yesterday but had not met him before. He is doing the loop single handedly on a pontoon boat that he has rigged with a very interesting canvas cover. I think he designed and built it all himself. Wish we had gotten a picture of it! He travels with his dog River, and has made it down from Lake Huron. We’re surprised we had not met any of these folks before, but they had just been a few weeks behind us all the way. “Lauren Grace” actually finished the loop last year and this year have been re-touring the Tennessee River system.

We were seated at two tables in the Conrad’s home, with no spouses seated at the same table. Patsy gave us our topics of conversation: how you met your spouse and what made you decide to do the loop. Of course, she said she was just kidding about giving us topics of conversation, but at my table we pretty much talked about just those things…it was fun! 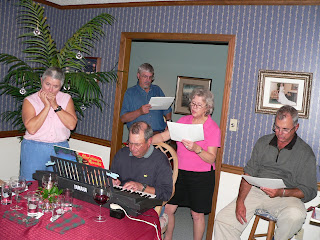 After a marvelous dinner of pork loin, roast veggies and rice, we sang Christmas Carols accompanied by a keyboard and me on the harmonica. Patsy is very musically talented, and in fact is the President of the Pensacola Choral Society. Tom has recently learned to play the autoharp. We had great fun!

By eleven o’clock the winds had finally died down to the point that we could get on and off our boat singlehandedly. All day long any time I wanted something off the boat or needed to get Beamer off for a walk, Rick would have to go out with me to pull the boat closer to the dock and hold it as I got on and off…that’s how strong the winds were. We generally got wet in the process from the waves breaking against the dock, so it was really something and we were glad that it died down before we went to bed!

Weather permitting we will leave here tomorrow and proceed to Fort Walton Beach.