[Rick] Today was a very easy day. We took the courtesy car to Tuscumbia, AL. You will recall that we have been to the area before, once about a year ago aboard the RiverBarge and then about two weeks ago as we went up the Tennessee River. Tuscumbia is the home of Helen Keller, WC Handy (the Father of the Blues) and contains the only Frank Lloyd Wright designed house in Alabama. This was also the first place to receive power from the TVA back in the mid-thirties. 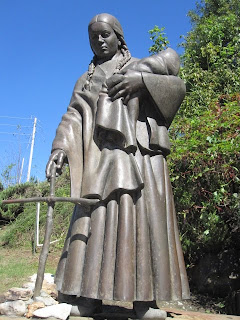 But, today, let’s focus on the history of the area, a dark history indeed. This was one of the holding areas for the Indian tribes as they were forced to walk to Oklahoma on the now infamous “Trail of Tears”. Tuscumbia was kind to the Indians and helped them in any way possible. Spring Park contains several statues, plaques, etc to commemorate the event. Of particular interest is the statue of an Indian woman, stopping to grieve over the grave of a loved one. She carries a small baby, the symbol of hope and the future. Around her shoulders is a blanket given to her by a Tuscumbia resident. Her face reveals the tremendous stress on her and her people, yet also indicates the determination of her proud people. The Trail of Tears was a dark chapter in American history and Tuscumbia wants all Americans to never forget it. 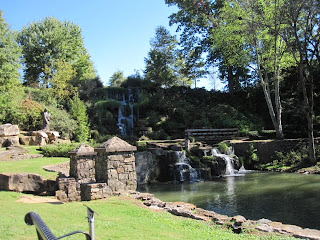 The central theme of Spring Park is a manmade waterfall, 80 ft tall, 40 feet wide, and constructed from local stone. 3.3 million gallons of water pass over the fall each day. The city of Tuscumbia gets its drinking water from this fall. 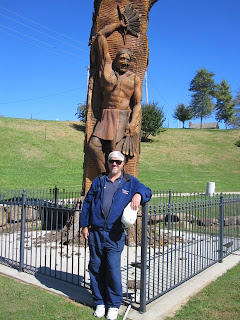