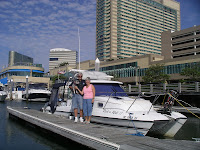 Betsy speaks: In spite of dark skies and fog we finally left Atlantic City early this morning. Weather radar indicates that tomorrow may be the only day this week we have a chance of going outside and up to New York harbor, so we were determined to get to the Manasquan inlet area today. The fog obliterated the tops of the casino towers in AC, as it had all week, but near the ground the visibility was not so bad, and there was no rain in the forecast in spite of the dark clouds. (My winnings early in our stay were fast being depleted with every trip to the casino, so that was another reason for wanting to get out of that town ASAP)!

The trip north again was very much like travelling the waterways of North Carolina. Several times I remarked that we might as well be cruising along in Topsail Sound. Just a few miles before our final destination, we went through a very narrow manmade canal that was about 3 miles long, straight as an arrow. Sounds easy, right? It was actually one of the hardest parts of the trip so far! Because it was so narrow and in an area near an inlet so with strong current, the water was extremely turbulent. And with boats passing close by in both directions at very slow speed (5 MPH limit) putting out big wakes, holding the boat on course was physically very draining.

Once through, we were in the very pretty town of Point Pleasant. As has been our habit on this trip, we had not called ahead for reservations. This was the first time it looked like we might be out of luck. The cruising guide we are using for this area is somewhat outdated. Two of the places we were hoping to stay no longer take transients. The third place put me on hold for a long time, asked several times about the length and beam of the boat, and about the draft. Finally, they said they had a slip we could use. 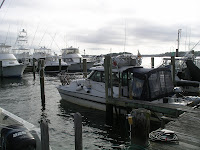 The marina has stationary docks with tiny finger piers, so I had no choice but to back in. The slip is extremely narrow, and there was lots of wake rocking us as I was positioning to back in, which I’m not used to. But I must say I did a good job…even the dock hand commented on how well I did under pretty awful conditions. Unfortunately, we fear that we will see more and more docks like this as we progress.

We got here about 2PM, and the boat has rocked and rolled constantly ever since…Being Sunday there is lots of traffic, and they don’t slow down for marinas! Poor Beamer is looking like a drunk when she walks. This is the first time she has seemed to be uncomfortable on the boat.

We walked into town to restock a few groceries. Point Pleasant is a very pretty little town from what we saw. When we got back to the boat we were repositioning the lines a little…Rick leaned over to re-cleat a bow line and heard something hit the water. He stood up and said “What was that that fell” and immediately realized one of the lenses had fallen out of those glasses he had just purchased 2 days ago in Atlantic City (for those that missed it, his frames had broken, so he had lenses put in new frames). $69 down the drink! We immediately borrowed a minnow net from the boat next to us and dredged the approx. 8 foot mucky bottom for 20 minutes trying to come up with the lens but with no luck. So he’s back to wearing his extra pair that is 2 prescriptions old.

We were just getting over that mishap when our neighbors that are keeping an eye on things at home for us called with more bad news. To make a long story short, our heat pump has sprung a leak and water has saturated the carpet on our ground floor. So tomorrow, as we’re heading out into the great Atlantic we’ll also be on the phone trying to get a carpet person to come suck up the water, and the heat pump people to come figure out what’s going on with that…the unit is only a year or so old!

On to other things…let’s talk about pump out problems. Every marina we’ve stayed at in New Jersey has had broken pump outs. Cape May, Atlantic City, and here at Point Pleasant, no pump out has been available! Since our holding tank is very small (10 gallons) we need pump out often! So we have to go to somewhere other than where we’re staying to solve that problem…very inconvenient!

Checking the forecast for tomorrow, things look good to go…Rain in the afternoon, seas about 2 feet. We’re heading out early in the morning, 25 miles in the ocean, then under the Verrazano Narrows Bridge and into New York. Hopefully will pass by the Statue of Liberty before lunch, and be settled into Tarrytown, NY before the rains come. From there, we can ride the train into NYC.

We feel like we’re a couple of days behind what we want to be, so we probably won’t spend much time in New York…that is a city that is maybe best visited at another time. We’re anxious to do the Hudson and the Erie Canal.

Rick speaks: A little shower or a change in wind direction or a change in wind speed is merely a minor inconvenience for most people. However, for the boater, weather can change a great day into a bad day. Wind speed and wave height are so related that a small change in wind direction or speed can change 1-2 ft seas into 3-5 ft seas. And 3-5 ft seas are not comfortable for any small craft. The prudent boater does not venture from shore without a basic understanding of the current weather conditions and the current forecast. For those with VHF radios, weather for the area is given on channel 1,2,3, 4, 5,6 with 2 being the best one for Eastern North Carolina. Just press the WX button on the radio. It is for this reason that we have chosen to get to Manasquan NJ and up to the Hudson River on Monday. The weather forecast for Monday is winds 5-10 knots and waves 2 feet while the rest of the week is winds 10-15 knots and waves 2-4. Two feet in wave height makes a lot of difference in our comfort level. We have no doubt the boat can take the pounding, but we know the pounding is not good for us and makes for a bad day.