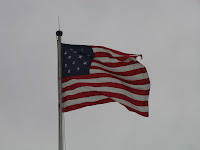 Rick here: We took the water taxi over to Fort McHenry. This is the fort that was flying the Stars(15 of them) and Stripes during the War of 1812 (We won), with the action of the bombardment captured forever in poem by Francis Scott Key. That poem was later set to music, and still later, proclaimed by the Congress of the United States as the National Anthem of the United States, and is known today as The Star Spangled Banner. Key, a lawyer on a mission to free a captured doctor, was onboard a truce ship in Baltimore City harbor during the 25 hour bombardment and eloquently wrote what he saw. 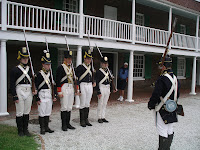 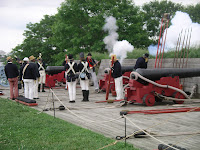 The fort has a group of about 100 volunteers that enhance the visit by dressing in period clothes, parading, drumming and fifing, shooting cannons, etc. We were lucky enough to go on Saturday, the first day the volunteers performed this year. In fact, we witnessed the firing of a 16 pound cannon, capable of sending a 16 pound projectile over one and one-half miles. It was loud.

In the evening, we rode the water taxi to “The Inner Harbor” for supper. This is a happening place. There are 100’s of places to eat and shop. There were two concerts being held, one Rap and one 60’s music. Guess which one we liked the best.

Missed opportunity for a great picture. Apparently, there was an Admiral Fell (Fells Point is named for him). In Fells Point, there is an Inn named for him. We did not get a picture of the sign out front: “The Admiral Fell Inn”. (We wonder what happened to the Captain?!)

We plan to leave tomorrow for Chesapeake City. The marina, Inner Harbor East Marina, despite some construction, was very nice. The people, Bill, Millie, and Wes were very helpful and someone was on duty 24 hours. Very good security. We also enjoyed riding the Water Taxi. $9.00 for the day, with unlimited transfers to 11 different stops
. 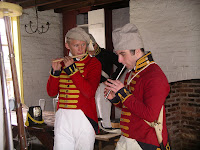 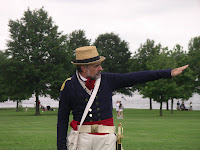