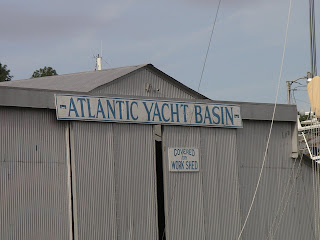 Betsy here, with some real excitement!
It’s Tuesday and we’re sitting under the pine trees waiting for the AC repairman, when we hear from the dockmaster that a sinking boat is trying to make it to this very dock…employees are frantically running with every pump they can find so they can be ready IF the boat makes it this far. I turn on my VHF radio and start listening to transmissions, and sure enough I hear the boat asking other boats to move out of his way so he can get to this marina ASAP. Shortly, we see him coming, bow riding very high out of the water as the stern is sinking. This is a BIG boat, an 82 foot Sunseeker (looks like a huge Sea Ray, its actually made in England…see www.sunseeker.com). As soon as they are near the dock, dock hands are jumping on board with pumps and hoses, and the water starts flowing, but the boat keeps sinking. We watched the stern go down at least 5 feet, and think it was actually sitting on the bottom before they finally started making headway. Divers were brought in, the local police, marine environmentalists, lots of excitement.
We had a front row seat, being docked just in front of where it came in. There were 2 people on board, the husband and wife owners. After very efficiently handling the lines, the poor woman sat on a step shaking and chain smoking. Her husband was very active with the rescue effort, as were at least 10 or 15 marina employees. I spoke with the woman to see if there was anything I could offer her, and she was very friendly in spite of being very upset. Later I also talked with the husband, who had a wonderfully cavalier attitude about it all, saying over and over “it’s just a boat!” 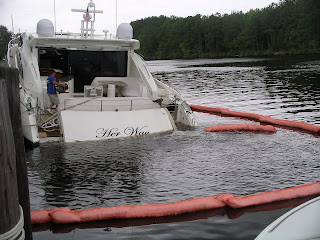 We learned that they had hit bottom hard just as the Alligator River enters the Albemarle Sound, a place we had navigated carefully just a few days ago. We had been warned of a dog leg that was a little different than even the most current charts, but we found the markers to be clear and had no problem. This owner was relying entirely on his GPS with a brand new chip, rather than following the markers, and went flying through and hit hard, by his own admission. Thinking he was taking on a little water, he stopped in Coinjock and had the shaft looked at (by a diver I think) and had a “minor” patch done that they said should get him to Portsmouth for a more permanent repair.
Then as they were waiting for a draw bridge about 7 miles from here (and 30 miles from Coinjock), the man put it in reverse and must have broken something loose and that’s when it started taking on water FAST! They made it through one more drawbridge (which I think opened just for them) and got here just before it was too late. Unfortunately also for them, in their rush to get here they threw out some major wake causing major damage to other boats and finger piers! 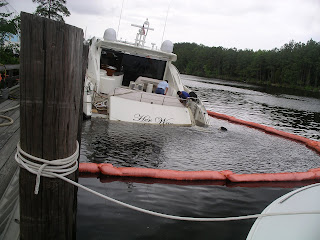 It took several hours and much manpower and pump power for the stern to finally start rising out of the water…and this only after a diver had gone under and put something over the bottom…we don’t know those details. The poor woman was concerned because she heard there was water in the galley! I told her it didn’t look like she was going to be cooking tonight, and there is a nice Japanese Steak House across the street! She also knew there was water in the master stateroom (one of 4, plus captain’s quarters). These folks were from Canada, and spend the winters in Florida. Although they’ve made the trip back and forth several times (the boat is 2 ½ years old), they usually ha 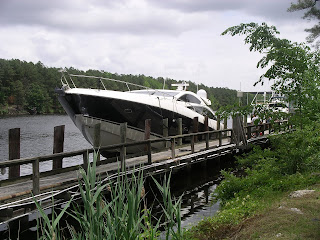 ve a professional captain on board, but decided to do it by themselves this time…OOPS!
The man was very talkative and friendly in between trying to be helpful in the rescue attempt. He admitted that he had a HUGE deductible and that the boat was way underinsured, but after all “it’s only a boat” he kept saying.
Mid-afternoon, right when things were settling down, our AC man finally showed up. As anticipated, this one is irreparable so we need a replacement. A new unit the size we need was nowhere to be found, but he was able to find a refurbished unit with full manufacturer’s warranty in Richmond, about 2 hours away and can get it for us tomorrow. Rather than pay him to drive to and from Richmond to pick it up, Rick called one of his old college buddies that lives near Richmond and we keep in close contact with, and he is going to pick up the unit and bring it to us. So hopefully that will be taken care of tomorrow and we can get underway. Duncan Mills of Richmond gets an attaboy!!!!!
We’re still hoping to get the throttle looked at here but that hasn’t happened yet, so we may just move on with it as it is and have the Glacier Bay dealer in Yorktown take a look at it.
So, in 8 days we’ve been just 250 miles. At this rate, this trip will take way longer than we expected! And for those that didn’t understand our lack of a specific plan, this is why you don’t plan ahead when boating! Our original “best guess” called for us to be in Yorktown last Friday. It is Tuesday and we will probably not make it tomorrow. Betsy 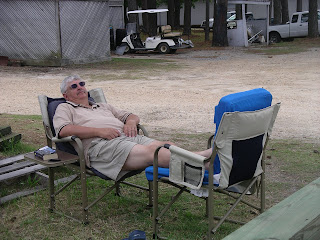 Someone has to wait for the Air Conditioner guy..